Paedophiles on 'Most Wanted' list Jason Waller and Dean Barnes

Paedophiles on 'Most Wanted' list Jason Waller and Dean Barnes 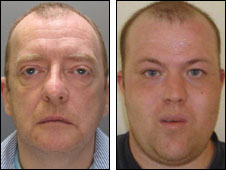 Two paedophiles described by police as dangerous have been put on the national "Most Wanted" website.

Jason Waller, 33, from Plymouth, and Dean Barnes, 48, from Merseyside, are not connected, but both have been missing for several months.

Barnes was last seen in October 2008 in Bury, Greater Manchester. He has breached his licence conditions and has connections in Merseyside and London.

Waller has been missing since March and is known to live a nomadic lifestyle.

Police said he travels across Britain from Cornwall to Basingstoke in Hampshire, Kent and London. Det Supt John Clements, of Devon and Cornwall Police, said Waller was a danger to children.

"So far, we have done our level best to find him through conventional police means and now we now want to extend our hunt for him and using the power of the internet to do just that." he said.

Det Supt Clements said public support had proven invaluable in the past and he was confident the Most Wanted site would help find Waller.

"By failing to sign on to the sex offenders register, Barnes has committed further offences and it is vital that we trace him as he poses a significant risk to children.

He speaks with a West Country accent and has been linked to Devon, Cardiff, Brighton, Bangor, Guildford and Cheltenham.

The Most Wanted website is operated by the Child Exploitation and Online Protection Centre (CEOP) with charity Crimestoppers.

Fourteen of the 17 offenders posted on the Most Wanted site have been caught.

CEOP chief executive Jim Gamble said: "Waller and Barnes need to realise that UK police will continue to harness the global power of the internet to find them and hold them to account, wherever they are in the world and wherever they may pose a risk to children."