For 20 years, coach John Hamilton was a fixture in the Fort Hunt area of Northern Virginia.

He was known not only as a baseball coach but also as an umpire and someone parents could count on when a child needed a ride home. Hundreds of parents and kids knew him and supported his family's silk screening business.

But police say his warm personality and engaging smile belied a horrifying double life he kept secret until early 2009. A 24-year-old man, now a father himself, walked into the Fairfax County Police Department and reported that he had been assaulted during a four-month period in 1997 when he was just 12 years old.

The man said that he had seen Hamilton at a local convenience store with a young boy, and the sighting convinced him to come forward.

After months of investigation by Detective Jeremy Hinson, Hamilton was arrested in May 2009 and charged with aggravated sexual battery and three counts of taking indecent liberties with a child by a person in a supervisory relationship.

Detective Hinson said he was shocked to learn during the investigation that a 16-year-old foreign exchange student was living in Hamilton's home and that he was slated to have two more exchange students younger than 16 in his home come August. Even worse, the detective says he learned from Hamilton himself that he altered his clothing to more easily expose himself.

The news of Hamilton's arrest rocked the Fort Hunt Community. Fairfax Police hoped the news would help more people come forward, and they did.

Not long after Hamilton's arrest, a judge set bond that was posted by his mother, Rose. His bond was soon revoked when he contacted one of his victims, but police said he first tried to kill himself by slitting his left wrist. He needed about 30 stitches.

As Hamilton realized the magnitude of the charges against him, he and his lawyer agreed he'd plead guilty to five of the most serious charges. He would be an old man by the time he got out of prison.

A second judge released him on bond because Hamilton promised he'd be in court Oct. 7, 2009, to enter a guilty plea -- but he didn't even have to post an additional cash bond. Hamilton was back out on the street -- no electronic monitoring, no checking in with an officer of the court and no passport revocation.

Soon, detectives say Hamilton and his mother Rose were planning a trip to Germany. Rose requested an expedited passport, withdrew almost $20,000 from a bank account and off they went. To quote a person close to the case, "It is clear that his plan was to get out and get lost."

One of the boy’s parents told AMW.com they were in court that day in October to see Hamilton plead guilty and were violated by him yet again when he did not show up.

AMW tips have put Hamilton in Germany, but he could be anywhere in Europe. With the cash his mother gave him likely running low, police think he may be relying on the hospitality and friendship of people he's met on the Internet.

If you know where John Hamilton is, you’ve got to call our Hotline at 1-800-CRIME-TV. Remember, you can remain anonymous. 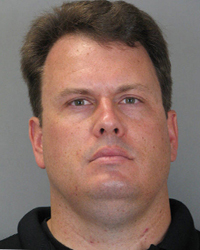 Sex: Male Race: White Current Age: 38 Height: 6'3" Weight: 285 Hair (Color, Description, Facial Hair): Brown
Eyes: Hazel
Scars and Tattoos: Two scars across his left wrist from what police say was a suicide attempt after he was released on bond last summer.
Traits and Habits: Very friendly and outgoing. Loves to be the center of attention. May have alot of Under Armour clothing because he took all the size XXL merchandise from his family sporting goods store. Always asks for extra ketchup or mayonnaise with his food.
Last Seen: Frankfurt, Germany
AMW Tipster has put him in Rothenberg, Germany in early November 2009. .
Other Possible Locations: Germany
Close to U.S. Military Bases in Germany.
Last Known Locations: Alexandria , VA
His mother's home in the Mt. Vernon area of Alexandria.

Soon, detectives say Hamilton and his mother Rose were planning a trip to Germany. Rose requested an expedited passport, withdrew almost $20,000 from a bank account and off they went. To quote a person close to the case, "It is clear that his plan was to get out and get lost."

Another mother living on the River of Denial. The thought of my son molesting a young boy would sicken me and in no way would I help him run. I would do my best to get him the help that he needed and that's what she should have done.
_________________
I've never been willing to sacrifice functionality for beauty ~ My Father