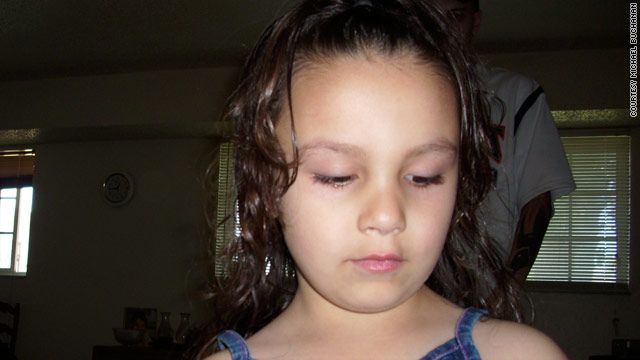 Nevaeh Buchanan was 5 when she was kidnapped on May 24 last year; her body was found in a shallow grave on June 4.

A fisherman found Nevaeh's body along the bank of the River Raisin near Monroe, Michigan, about 10 miles from the apartment she shared with her mother and grandmother.

An autopsy showed the child died of asphyxiation. According to local news reports, she was most likely buried alive, though police will not formally confirm details. They did say, however, that a material similar to cement was found on top of her body.

A year later, no one has been charged with abducting and killing Nevaeh. Her family is still waiting for answers.

Last month, on the anniversary of the child's death, an organization called Justice for Nevaeh held a rally down the street from the apartment complex where she lived. The event included games and food for children as well as karate, self-defense classes and child safety presentations.

Nevaeh was last seen the evening of May 24, playing in the U-turn driveway of her apartment complex.

"She wasn't supposed to be outside," Jennifer Buchanan said. "She was supposed to be upstairs at a neighbor's playing with her friend at their place."
--Jennifer Buchanan, slain child's mother
Buchanan said she searched for Nevaeh after another child tattled that she was playing outside. She recalled the cold fear that gripped her when she found her daughter's tricycle abandoned at the edge of the property.
"The sun was going down. It was almost 8 p.m. so I went looking for Nevaeh, but we couldn't find her," said Buchanan, 25, who herself had recently been in trouble with the law. She had spent a few weeks in jail before being placed on probation in connection with a home invasion.
"I was in some trouble, but after I got out I focused on my daughter and getting my life back together," Buchanan said.

Nevaeh's official guardian was her grandmother, who lived in the apartment with them.

Buchanan said police told her that Nevaeh was not sexually assaulted and that no drugs were found in her system.
Police would not discuss whether the child was sexually abused, but Detective Sgt. Heath Velliquette of the Monroe County Sheriff's Office said toxicology reports came back negative.
Early in the investigation, police focused on two of Buchanan's friends. Both were convicted sex offenders. The men were arrested on parole violations and questioned extensively. Neither has been officially named a suspect.
One of the men was living at a nearby motel, and police searched his room but found no forensic evidence to connect him to the child's disappearance.
Buchanan explained that she met one of the men while reporting to her probation officer. She said she had known him for two years and never left her daughter alone with him.
Nevaeh called him "Daddy George," and he brought her toys and gifts, Buchanan added. She said she knew about his past rape case, adding, "I believe people should get a second chance."

Police have since shifted their focus away from the two sex offenders.
"We are looking in a different direction in recent months, based on our investigation," said Velliquette.
Investigators are looking at another Monroe resident, but Velliquette would provide no further details.
"This is not a cold case," Velliquette said. "We are following up leads and investigating new information every day."
Police say that while they are not naming any suspects or persons of interest, investigators have not ruled anyone out either.

The FBI is offering a $20,000 reward for any information leading to the arrest of a suspect. If anyone has any information, police ask that you call their tip line at 734-457-6713.

Re: Police Seek Tips In The 2009 Abduction And Slaying of 5 Year Old Nevaeh Buchanan

Well, Thank goodness..finally..something on this case. I have wondered if LE was sweeping this horrific case under the rug.

And, I have zero sympathy for her mother. She should not have allowed her 5 year old daughter to go up to her friends apartment alone. How did she know the friend was even home? And to just sit there while Neveah is outside in an apartment parking lot, meantime..she is living with a KNOWN child sex offender..and has other sex offender friends..what a crock!! I blame the mom completely for Neveah's horrible death!
_________________
Prayers for our little HaLeigh Cummings, wherever she may be!!