The boys, 2 and 4, were reportedly taken by two men and driven away in a gray- or pewter-colored 2010 Dodge Caravan minivan.

The boys' mother was outside their residence with the boys. Taking the garbage out to a trash bin in an alleyway, she turned away for a moment and two men each grabbed the boys and sped off. They were last seen driving westbound on Orange Ave.

A statewide Amber Alert has been issued.

One suspect is described as Caucasian or light-skinned Hispanic male, 5 feet 10 inches tall, wearing shorts and a baseball cap.

The other suspect has long hair and a mustache. He was described as heavy-set with an overbite. He was also described as Caucasian or light-skinned Hispanic male.

No license plate information was available. 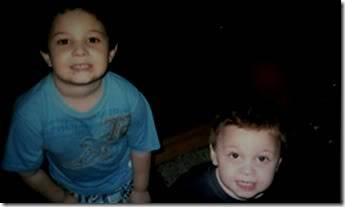 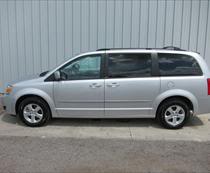 Police say they believe a father and grandfather abducted two young boys from the Anaheim apartment complex where they lived with their mother.
Police Sgt. Bob Dunn said the boys, 4-year-old Jacob Quinones and 2-year-old Justin Quinones, had gone with their mother to take out the trash just before 8 p.m. Thursday when they were snatched by two men in a van.
Dunn identified the men Friday as Abraham Fernandez, 23, and his father, Louis Mendoza Fernandez, 52.
An amber alert was issued for the boys. The suspects were thought to be driving a silver 2009 Dodge Caravan with a dent on the right front door and tinted windows.
Dunn said they may be headed to Texas since they are from that area.
The Orange County Register reported that their mother was taking out the trash from her apartment complex in the 3300 block of West Orange Avenue — directly across from Western High School — when the abduction happened.
She said the boys had followed her out into the alley where the trash can is kept, the newspaper reported.

Anaheim police Sgt. Rick Martinez told the Register that the van stopped, two men got out and snatched the children. They then took them into the vehicle and drove away.

Police Find Minivan Used in Amber Alert Abduction, Search for Toddlers Continues
Police say the boys were taken by their father and paternal grandfather, who were driving a 2010 silver or gray Dodge Caravan.ANAHEIM (KTLA) -- An Amber Alert was called off Friday after police found the suspect vehicle used in the abduction of two toddler boys. The children and the suspects have not been found, but are believed to still be in the local area.

At around 3:30 p.m. Friday, Anaheim police reported they had found the silver Dodge Caravan used by the suspects who snatched 2-year-old Justin Quinones and his brother, 4-year-old Jacob Quinones, away from their mother Thursday evening.

Police received an anonymous tip that the minivan was a rental and had been returned to a car rental business, said Sgt. Rick Martinez of the Anaheim Police Department.

He could not specify where the car rental business was, but did say that it was "local," which led investigators to believe the boys and their abductors are still somewhere in Southern California, possibly being harbored by family or friends.

"If you are harboring these criminals, it is a felony and the police department will pursue charges," Martinez says. He added that police wanted to hear the side of the captor, who is believed to be the boys' father.

The boy's mother, 24 year old Susana Quinones, made an impassioned plea for the safe return of her sons, saying she would not press charges in return.

"Anyone, please help me out. Call authorities. In the name of Jesus, that's all I want from anybody-- my babies," Quinones said Friday.

At around 7:50 p.m. Thursday, the toddlers were abducted from the 3200 block of West Orange Avenue by two men in a minivan, according to Martinez.

According to police, the men grabbed the boys and ran off with them as they followed their mother to an alley dumpster where she was taking out the household trash.

Police initially believed this was a case of stranger abduction, however, early Friday Martinez said the suspects were the boys' father and paternal grandfather.

Investigators have identified the men as 23-year-old Abraham Fernandez and 52-year-old Louis Mendoza Fernandez, both believed to be Houston residents.

"We believe they may be on their way back to Texas. We don't know for sure but they may be en route out of state," Martinez told KTLA.

Justin is described as 2 feet 6 inches tall and weighs 38 pounds. He has black hair, brown eyes and was last seen wearing a Buzz Lightyear t-shirt.

He was last seen wearing a Buzz Lightyear t-shirt and beige shorts with a grey jacket.

The boys' mother reported that the men were driving a 2010 silver or gray Dodge Caravan. The Caravan has damage on its passenger front door, tinted windows, and possible paper plates. 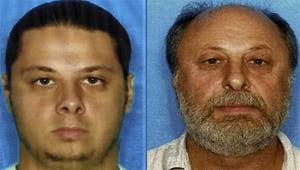 If you look at those pictures of Dad and Papa it is clear they should not being having any involvement raising these boys. Those two look like meanies.

ANAHEIM (CBS) — Authorities have arrested a 26-year-old man who they suspect helped in the abduction of two boys in Anaheim last week.

David Nicholas, of Monrovia, may have helped the boys’ father and grandfather to take the children while they were standing outside an apartment complex with their mother Thursday night.

Nicholas was arrested at his home Sunday and booked on suspicion of conspiracy. His bail was set at $1 million, according to Anaheim police Sgt. Rick Martinez.

The car allegedly used to abduct the boys was found Friday and belonged to a rental agency. The Amber Alert was canceled.

Authorities initially believed they boys’ father, 23-year-old Abraham Fernandez, and their grandfather, 52-year-old Louis Mendoza Fernandez, might be taking the boys back to where they live in Houston but later determined they were still in California.

The boy’s mother, 24, had reportedly been living with the father in Texas before coming with the boys to California several months ago.
﻿

I feel so badly. I automatically suspected the mother did something with the boys. Getting jaded with all these witch mothers.

Critter wrote, "Getting jaded with all these witch mothers." Nobody could have said this better. I was just remarking to my husband how hard it is to understand that there are so very many selfish, evil young women out there today who are so cruel and murderous to the innocent babes in their care. So very hard to understand what has happened to the nature of womanhood in many in this generation.