Vermilion, IL (WICD) - The family of a dead 10-year-old girl in Vermilion County, Illinois said she killed herself because she was bullied.

Ashlynn Conner was a third grader who loved to help others.

"She brings this bag down the hallway, just bringing it down the hallway and she brought it to me and said they were clothes and they were to go to Haiti," said Stacy Conner, Ashlynn's mother. "She didn't want them anymore because they needed them more than she did."

The family said the bullying was too much for Ashlynn. She hanged herself with a scarf in her bedroom Friday night.

Loved ones made posters for her funeral. The family said they have been touched by the support they have received from the community and it has helped them get through things. 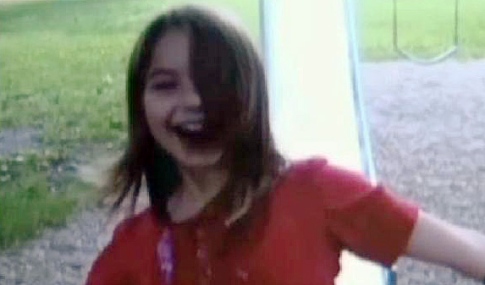 A 10-year-old Illinois girl who hanged herself in her closet last week had suffered repeated taunts from bullies mocking her for being overweight, her family said.

Ashlynn Conner’s heartbroken mother, Stacy, told local TV station WCIA-TV that Ashlynn had come home crying from school about two weeks ago, complaining that she was being bullied in her neighborhood as well as at school.

Then, last Thursday, the taunts got so bad that Ashlynn asked her mother to be home-schooled.

Her mother said no to the request. The next day, Ashlynn’s sister found her hanging in the closet from a scarf fashioned into a noose, the TV station reported.

“I thought my kids are strong kids, and that my words for them for guidance and advice [were\] going to have more weight than what these kids could be saying,” Stacy Conner told WCIA-TV on Sunday.

But the law was not able to protect Ashlynn from the pain that led her to take her life.

“I don't know what it's going to take to stop it, but no child should ever have to feel like they have to kill themselves to stop that kind of pain,” her mother said.

RIDGE FARM — Ashlynn Conner was excited about Thanksgiving and turning 11 on Dec. 2.

"She just loved the holidays and any occasion where there would be a big family gathering," her grandmother, Lory Hackney, said Monday.

Family and friends gathered at the Hackney home in Ridge Farm on Monday to grieve the loss of 10-year-old Ashlynn, who died Friday night at her home.

"We are not ruling out bullying, but we don't have any firm evidence to support bullying," he said Monday night.

But Ashlynn's mother, Stacy Conner, and grandmother, Lory Hackney — with whom Conner, Ashlynn and Conner's older daughter lived — said the girl had been "teased and taunted" by kids at school and in the neighborhood for several years.

Relatives described Ashlynn as fun and bubbly. But she also was a very sensitive girl who wanted to please others and took very seriously the "nitpicking" that kids do, like teasing about hair or clothes.

Hackney said the bullying started when Ashlynn was around 7.

"When she started cheering for youth football, we'd gotten her hair cut in a bob," she recalled. "The kids started making fun of her then. They started calling her a boy."

To this day, her daughter hated to have her hair cut, Conner said.

Hackney said the bullying, which she described as mostly verbal and emotional abuse, continued as she got older. Kids would call her fat, ugly, a slut.

Conner said when she picked up her daughter after school Thursday, Ashlynn was upset about three girls picking on her all day. She said Ashlynn asked if she could be home-schooled. Conner said she told her daughter that they would talk to the principal on Monday.

Conner said her daughter was in a bad mood all night Thursday, but Friday, a day off from school for Veterans Day, she seemed in better spirits.

Conner said she can't understand what happened through the day Friday that drove Ashlynn to take her life that night. Conner said she overheard her daughter tell a classmate on the phone Friday night that she had told her mother about the girls picking on her but her mother wouldn't let her be home-schooled. Conner said it was about a half-hour later that they found her dead.

Hackney said the family was home that night, when they noticed Ashlynn had been missed for a while. When her older granddaughter, Michaila Baldwin, 14, went looking for her sister, she found her body in her bedroom closet.

"I don't know what was so bad she couldn't wait," Hackney said, breaking into tears. A retired registered nurse, she had tried giving CPR to her granddaughter, but it was too late.

"All she wanted to do was make people happy and please them," said Conner, who added that she believes "it all just got to" Ashlynn.

Despite the teasing, Hackney said, Ashlynn liked school and made the honor roll this quarter.

"When she got home from school, she would go straight to the kitchen table, sit down and do her homework. We didn't even have to ask her," her grandmother said. She said Ashlynn was learning to play the trumpet and wanted to be a veterinarian when she grew up. Conner said her daughter loved her teacher and her principal.

On Monday, grief counselors met with staff at Ridge Farm Elementary School, where Ashlynn was a fifth-grader, to advise them on how best to comfort students and talk to them about the tragedy, interim Georgetown-Ridge Farm Superintendent Kevin Tate said. He said the counselors, along with the school psychologist and social workers, were on hand to provide counseling to students and staff.

Counselors were also at Ashley's home on Monday, helping the family deal with their loss.

The Ridge Farm community came together on Monday night as well, holding a candlelight vigil at the Ridge Farm Friends Church. More than 200 people attended.

Conner said she isn't angry at the kids who bullied her daughter, because they're just kids and don't realize what they're doing. She said the principal "couldn't have done any more than he already did." She said she does wish teachers would have listened more to her daughter rather than just telling her to stop tattling.

"I wish there was more I could have done for her," Conner said.

Hackney said she's determined to do all she can to raise awareness about bullying.

"We have to prevent it so there won't be other Ashlynns," she said, her voice choked with emotion. "I want to see a law that will hold parents accountable and to a degree, the kids, depending on their age. This cannot continue to happen."

OMG!! Another child takes her life because of bullying!!!

Her Mom was on tv this morning ...she broke my heart. Sounds as if she thought she had done every thing she was supose to do.In hind site is second guessing that but how could you not. I hate that kids can be so mean!