Well that question will be answered at 1pm eastern on Wednesday Dec/7. I just got off the phone with Cobra, and he is telling me that big things are afoot. He called from Gainsville, Florida en route to Tallehasse.

He shared bits and pieces with me, but has asked that I not release them just yet. He would rather do it in person on the radio.

Cobra is a guy you either love or hate, but you cannot ignore him. I know that from personal experience. Early one morning the phone rang, Jan and I were sleeping, Jan looked at the caller Id and told me the call was for me and it was Cobra. Its ok, he will get bored and I’ll call him back later. After 5 minutes of the phone ringing, it was clear that he was serious. I climed out of bed, and answered the evil device.

Sure enough the infamous Cobra was standing on my front porch!

Both Jan and I are proud to know Cobra. He is a friend of the family. Alas his career was derailed for a short time when he tried to assist in locating the high profile, and still missing Florida girl Haleigh Cummings. Yes, he was busted for trying to be a good citizen. He managed to spend a night in jail, and as a result lost some of his licenses.

A hard core number of Cobra haters have waged war on the poor man. But, if you know Cobra, you are well aware that he is not a quitter. He has toiled long and hard to clear his name. I think this picture says it all. 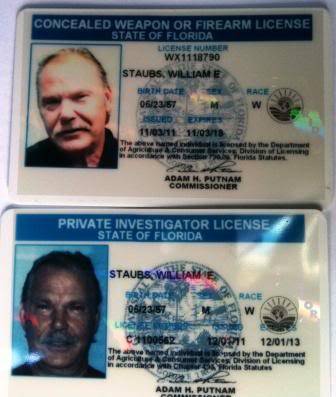 Not in a million years a small band of Twiterati said. Cobra is a washed up has been, no way could he get his licences back, The twits were wrong, and Mr C, is back!

Loaded for bear, I suspect that joining the Cobra Is An Idiot movement was not the smartest thing that anyone might have done.

Where his gun sights are aimed at I have no idea. But he may share some insights on tomorrows radio program. At 1 pm eastern tomorrow Dec/7 I will be talking to him, the link to listen live is here.
http://www.blogtalkradio.com/simon-barrett/2011/12/07/william-cobra-staubs-talks

Good friends don't say things like that unless it's a Dire emergency. So...what was SO earthshatteringly important?

OMG unless someone was dying I think he'd be laying on the front porch!!!!!

... or maybe he was just trying to be funny? They say funny is in the eye of the beholder, or something like that...!

At that hour of the morning, due to the fact I am a :nightowl: , I would probably just be going to la la land and not find it funny at all...but that's just me.