Marston Hefner was arrested on suspicion of misdemeanor domestic violence Sunday afternoon at Playboy Mansion in Pasadena. He was later freed after posting $20,000 bail.

Police Lt. Rick Aversano told the Los Angeles Times that police were called to the mansion and arrested Hefner after determining that Claire Sinclaire (she was 2011's Playmate of the Year) had minor injuries consistent with an assault.

But Sinclaire on Monday told E! Online that she will not press charges if Marston Hefner makes a public apology and agrees to get counseling. She made the comments while at Pasadena Police Department to obtain an emergency protective order against the 21-year-old Hefner.

"I want him to admit that he did hit me more than once. If he can do all of that and get help, I will never press charges. That's all that I want at this point. Playboy let me know this afternoon that he will be doing this, so I just hope they stick to their word."

There was no official word from the Hefner family or Playboy Monday. An emergency protective order typically is good for three to five days.

Marston is the older of two sons that his famous dad had with ex-wife (and 1989 Playmate of the Year) Kimberley Conrad.

Speaking of Look-A-Likes... Does anyone remember Hef's girl Barbi Benton? Well daddy's apple didn't fall too far from the tree cause it looks like father and son have the same taste in women!

Playboy Playmate Claire Sinclair has been granted an emergency restraining order against Hugh Hefner’s son, Marston Hefner, after he allegedly beat her up during a heated argument.

Police officers at the Pasadena Police Department interviewed Sinclair about the incident and granted a stay-away order against the junior Hefner to give the model time to move out of the apartment she shares with him.

The Playmate plans to leave as soon as possible, but if she needs more time she’ll have to go to court to extend the protective order.

Sinclair, 20, said she called Hugh after the incident and he expressed his sympathies, claiming he was very disappointed by the situation.

Another spoiled Hollywood brat. I wonder if this Hefner kid works or if he's living off Daddy's money?

Both Hugh and Marston are so darn ugly. I don't understand the Women that flock to them

I agree with all of your comments. It is the

I've been to the mansion, NOT as a Playgirl but he is VERY nice..couldn't be nicer. Of course, this was back in the early 80's and he was a charmer all the way..cater's to women big time. But, Yes, of course..it's the dinero. And, I agree..his son is not someone I would consider good looking at all.
_________________
Prayers for our little HaLeigh Cummings, wherever she may be!! 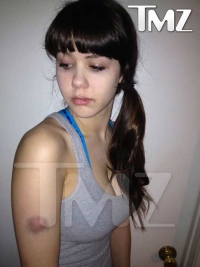 Hugh Hefner’s middle son pleaded no contest Tuesday to roughing up his Playboy Playmate girlfriend during a violent rampage inside their Pasadena apartment last month.

Marston Hefner, 21, was sentenced to a 52-week domestic violence program and periodic progress reports with the court over the next three years, the Pasadena City Prosecutor’s office confirmed.

The soft-core scion must also continue private therapy and stay away from victim Claire Sinclair – a Bettie Page look-alike and Playboy's 2011 Playmate of the year – during the de-facto three year probation, prosecutors said.

“At the end of the three years, he can withdraw his plea, similar to an expungement. But it’s contingent upon him obeying all laws and court conditions,” Assistant Pasadena City Prosecutor Chris Blankenhorn told the Daily News.

Marston Hefner was accused of one count of battery on a spouse or cohabitant and one count of vandalizing a laptop computer after the Feb. 12 meltdown.

“The (vandalism) charge was dismissed with a waiver he’ll pay restitution for replacing that,” Blankenhorn said. “They’re not living together anymore. She had moved out prior to charges even being filed.”

If convicted at trial, Marston Hefner faced the possibility of more than a year in jail.

Shortly after the incident, Sinclair posed for TMZ.com with a giant purple bruise on her arm and claimed the heir had been violent before.

“I will not press charges against Marston Hefner if he keeps his word to give a public apology for physically abusing me on several occasions and seeks psychiatric help for his anger issues,” she told TMZ.