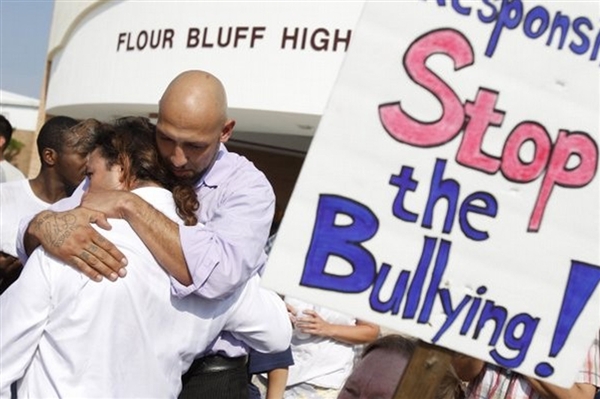 By Miranda Leitsinger, msnbc.com
Bullies had been hounding high school freshman Teddy Molina for years, making fun of him for being mixed race and threatening to hurt or even kill him, his family says.
The teasing from a group known as the “wolf pack” grew so bad that Molina wound up leaving his Corpus Christi, Texas, school last month. Then he took his life last week with a hunting rifle. Molina’s death has triggered outrage and tumult in his South Texas community: an anti-bullying rally erupted into violence, a rumored gun threat online led to a stepped up police presence at Flour Bluff High School and a number of parents have come forward claiming that the district is not doing enough to combat bullying. “We need to come together and we need to stop this, and we need to do it peacefully,” his sister, 18-year-old senior Misa Molina, told msnbc.com.
Bullying has become one of the hottest issues facing schools, with a newly released documentary focusing on the issue, and sites like Facebook and Twitter allowing rumors and taunts to spread like wildfire.
While there are no hard and fast statistics linking bullying to suicide, Dr. Melissa Reeves, a school psychologist and expert on bullying, says harassment by peers can be a “big factor” in youth suicide but that it’s usually one among many causes.
“When they really get to a sense of hopelessness and helplessness, you know, where they see no other way out of this particular situation, then, unfortunately that is when we do see completed suicides,” said Reeves, chair of a National Association of School Psychologists’ Prepare Working Group on Crisis Prevention and Intervention.
Suicide is the third-leading cause of death among people between the ages of 10 and 24, with males making up 84 percent of the approximate 4,400 victims reported a year, according to the Centers for Disease Control and Prevention. Hispanic and Native American teens and young adults have the highest rates of suicide-related fatalities. The trouble for Molina, who was part Korean and part Hispanic, began at Flour Bluff Intermediate School in Corpus Christi, a port city of 300,000 along the Gulf of Mexico.
The problems escalated in junior high school, when Molina joined the football team, where, his sister said, the players picked on him and the coaches allowed it. She said her brother told her that some of the bullies repeatedly said they were going to kill him and that she had helped come to his rescue when some teens cornered him at a taco stand and appeared ready to jump him.

CORPUS CHRISTI — Discussions about bullying and how local school districts can continue to combat the behavior reached boardrooms and campuses Monday.

The public conversations, which included school board agenda items and at least one email from a local high school principal to parents and community members, came after Flour Bluff ISD officials first grappled with the suicide of Ted "Teddy" Molina, 16, who killed himself April 1.

His death, which friends and family attributed to bullying, spurred many of them to rally in support of ending bullying. Supporters conducted the third rally in less than a week Monday in front of Flour Bluff High School.

"I just wanted to be a little proactive in this, and talk about some of the things we are doing and handling," London ISD Superintendent Hal Roberts said.

Concerns aren't necessarily because of recent incidents in the Flour Bluff Independent School District, Roberts said, but because of many stories played out in the national spotlight regarding bullying.

CCISD trustee Tony Diaz, who placed a discussion item about bullying on his district's board agenda, said he saw the Flour Bluff incidents as a call to action.

"I see it as a wake-up call in that it's becoming increasingly prevalent throughout the country and (in) many schools," he said.

Diaz said during Monday's board meeting that he wants parents to know they can trust schools to consider their students' safety as a top priority.

The recipe to ending bullying, he said, may involve everyone modeling the "Golden Rule" of treating people the way they themselves want to be treated.

Roberts said bullying is a hot topic nationally, and people usually look to school districts to see how related issues are handled.

"And rightly so, we want to make sure that we are doing our due diligence and handling cases as they come along," Roberts said.

London School Principal Clay Campbell said the school has had about 15 to 20 reports of bullying this year through its online reporting system, most involving name-calling.

Campbell said schools have to consider the whole picture involving a student when dealing with bullying behavior. School officials have to be aware of how many times a student is called a name or what may be going on at home, he said. It's no longer "kids are being kids," he said.

Roberts said it's not clear if bullying is getting worse or if it's just getting more attention.

"We need to make sure that our kids our safe, and that when they come to school they're learning in a safe environment; and that's our No. 1 concern," he said.

CCISD also has an online reporting system, in which students can provide information about bullying anonymously. Great Idea!!!!

Cissy Reynolds-Perez, principal at Ray High School, sent an email to community members on her school email Listserv on Monday encouraging parents and their children to talk about bullying and to report concerns.

"I assure you that no report is being taken lightly," she wrote. "The more information we all have, the better we can serve students and take action."

CCISD officials have coordinated a Bullying Summit in May to discuss the district's anti-bullying initiatives, which include peer focus groups and an iPhone app for bullying reporting.

CORPUS CHRISTI — A group of more than 100 gathered in front of Flour Bluff High School on Wednesday calling for an end bullying behavior after a teenager's family and friends say his death was associated with bullying.

Ted "Teddy" Molina, 16, killed himself Sunday night inside his bedroom.

Family and friends say Ted had complained for years that a group of boys repeatedly harassed him, using racial epithets and threatening to fight him.

Flour Bluff ISD Superintendent Julie Carbajal confirmed Ted's mother filed a bullying report at the high school in February and as a result another student was disciplined.She said she is still trying to determine the number of reports involving Ted, but she feels high school officials properly addressed any related issues.

Flour Bluff Independent School District officials are conducting an investigation into incidents involving the discipline of Ted and/or other students, Carbajal said.

"We may find out information we didn't know," she said.

She said the school district doesn't deny bullying occurs on their campuses and issues have been addressed throughout the district.

Carbajal said the district has programs at all campuses that address bullying and reward positive behavior, and officials rely on parents and the community to help.

Corpus Christi police are conducting an investigation into Ted's death. The teenager's computer has been turned over to police, family members said.

Ted's death has spurred a community-driven concern with bullying, and many at Wednesday's rally said they want the behavior to stop.

During the protest, police arrested a 38-year-old man on suspicion of assault and public intoxication, both misdemeanors, after he attacked people he believed threw an object at a vehicle he was traveling in along Waldron Road. This is Unreal!! Cannot believe I didn't hear about this before!!

A witness told police an object was thrown from the crowd of protesters about 6 p.m.

Throughout the more than two-hour rally, protesters held signs, including one that transcribed Ted's final Facebook post onto a poster: "I am not a gangster; I am not a 'G'; I'm just me, and glad to be."

One of Ted's friends Noah De Los Rios, 16, who made the poster for the rally, said Ted's last post showed his character.

Noah was among more than 500 people who crammed into St. Paul the Apostle Catholic Church in Flour Bluff earlier in the day to attend a funeral service for Ted.

Many wore blue shirts and blue ribbons to symbolize anti-bullying.

He said that while his friends and relatives are wondering what more they could have done or said to prevent his suicide, Ted likely did not kill himself because of a single incident or comment.

Rather, those who commit suicide often do so because of an accumulation of anguish and pain over a period of time, Martinez said.

Addressing allegations that Ted was bullied, Martinez said Flour Bluff ISD should have done more and that denying the existence of bullying will not make it go away.

However, the district is limited in what it can do. District officials can threaten bullies with discipline but fear is an imperfect motivator, he said.

Instead, bullies, who are nothing more than broken people, need to be healed by loving families, people, communities and churches, he said.

Many rally attendees, including some of Ted's 20 family members, said they want improved legislation to help better define bullying.

Ted's grandmother Mary Ann Molina, 65, who held a sign that read "FB take responsibility ... Stop the bullying," said other children may feel bullied like her grandson and more laws would provide consequences for bullies.

She said she hopes people in the community continue to speak out about bullying, and report it.

"I just want parents to be aware," she said.

Ted's sister Misa Molina, 18, a senior at Flour Bluff High School, said the rally showed how much her brother was loved. It also was an example of strength in numbers, she said.

"It's always hard to stand up for what you believe in," she said.

One way to stop bullying on facebook is to enforce the rule no one under 18 allowed.

I don't believe the schools are doing all they can either.