DES MOINES, Iowa - Three people were arrested in Des Moines after police said they were alerted to online prostitution.

In a news release, Des Moines police said vice and narcotics officers identified what appeared to be a prostitute for hire on the website backpage.com.

Police said an undercover officer made an arrangement over the Internet on July 12 to meet with a female at the Holiday Inn at 1050 6th Avenue. During that meeting, police said a deal for sex for money was made, and the female was arrested.

The investigation led the officer to an adjacent room in the hotel where two others were arrested. Police said Atlantis Carter, 22, of Waukegan, Ill., and Erika Hart, 23, of Honolulu, Hawaii, were pimping prostitutes by advertising, arranging for sex services, and renting hotel rooms.

Police said they later determined that the female arrested for prostitution was a 16-year-old runaway from Portland, Ore,. The teen was suspected of being involved in sex trafficking and had been missing since June 21, according to police. 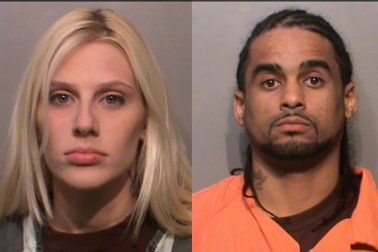 I am so glad LE got wind of these two and that the girls they pimped out are getting some kind of help to get out of this dangerous profession.