A man has been arrested after allegedly going on a stabbing spree and wounding people at a Texas community college near Houston , according to authorities.

Four victims were taken by helicopter and two more taken by ambulance to nearby hospitals, said Robert Rasa of the Cy-Fair Volunteer Fire Department.

One witness, identified only as James, told ABC News affiliate KTRK-TV that several students were stabbed in the neck and others helped tackle the suspect.

An emergency bulletin was initially released warning students that two armed suspects were on campus.

"Two armed suspects at LSC-CyFair. One suspect is at large. Stay away from the area. Seek shelter in a secure location until the incident is resolved. Be aware of your surroundings," the school told students via an emergency bulletin.

Police said they now believe there was only one suspect, but are searching the campus.

This was/is just so awful! Another lone student, obviously some mental breakdown or something and he goes around slashing those poor kids. I sure hope those two kids who are in serious (critical?) condition pull thru'!

I saw it on FB..breaking news and at first thought it was the SAME college. This is never-ending!
_________________
Prayers for our little HaLeigh Cummings, wherever she may be!!

Warrant: Texas suspect interested in cannibalism
By JUAN A. LOZANO | Associated Press – 1 hr 41 mins
HOUSTON (AP) — A man accused of stabbing more than a dozen people at a Houston-area college told investigators that he had fantasized about cannibalism and necrophilia and about cutting off people's faces and wearing them as masks, according to a court document made public on Thursday.
Dylan Quick also told an investigator that he had researched mass stabbings on his home computer about a week before the attack at Lone Star College in Cypress, according to a search warrant affidavit.
"He stated that he had read numerous books about mass killings and serial killers which are also located at his residence," the affidavit said.
Quick is being held without bond on three counts of aggravated assault with a deadly weapon for Tuesday's attack that injured 14 people. Only one person remained hospitalized Thursday, and that person was listed in good condition.
Quick's attorney, Jules Laird, said after a court hearing earlier Thursday that he was still looking into his client's background. Laird said he didn't think the 20-year-old had a history of mental illness. But he said Quick was on suicide watch and will stay in jail as he undergoes a psychological evaluation.
"Not every question has an answer that satisfies you or that says this is the root cause of why he did this ... with a knife. We are going to see if we can reach that," Laird said.
The affidavit released later in the day named nine items that were seized from Quick's home, including one listed as "Hanibal Lecter Mask." Hannibal Lecter is the cannibalistic serial killer from the 1991 movie "The Silence of the Lambs."
Other items seized included a laptop, an animal dissection kit and several books, including ones called "Hit List" and "Hitman." The affidavit does not say what the books are about.
Laird had described Quick as a voracious reader who had thousands of books.
The affidavit said Quick told the investigator that in preparing for the campus attack, he had sharpened various things, including a hairbrush and pencils, to use as weapons. However, authorities have said Quick used only a razor utility knife to slash at his victims on two floors of the college's health science building. They said a scalpel was found in a backpack he was carrying when he was arrested.
Authorities have said students tackled Quick and held him down outside the building until police arrived. Texas does not permit people to carry handguns on campuses, but lawmakers are considering allowing concealed permit holders to take their weapons into college buildings and classrooms.
A Texas House panel approved such a bill Thursday, sending it to the full House. Supporters say it's a self-defense measure that will help prevent campus shootings and assaults. Opponents argue that allowing guns into campus buildings increases the chances for violence.
Quick had been set to make his first court appearance Thursday, but Laird waived the reading of the probable cause statement so his client would not have to be in court. Quick's next hearing is May 10. If convicted, Quick faces up to 20 years in prison.
"We just didn't want to have a media circus at this point in time," Laird said.
When asked about claims by the Harris County Sheriff's Office that Quick admitted to having fantasies about stabbing people since he was 8 years old, Laird said, "They've got a statement from him, but that's not the whole story."
"There are other things that I need to find out about and then we will provide the whole story to the public so that they can understand what happened," he said.
Laird said Quick had been home-schooled for most of his life and that he had been enrolled at Lone Star in part so he could be around other people and "get some type of feel for what the rest of the world is like as opposed to just living at home ... and being home-schooled by his mother."
Laird said Quick's parents hadn't had any major problems with their son, though he did apparently go missing for a few days in January 2011.
Quick's parents had contacted Texas EquuSearch, a private Houston-area group that searches for missing people, after getting a text message from their son saying "he was leaving because he might possibly harm himself," said Frank Black, a case adviser with the organization.
Black said he and others with his group were set to begin a search for Quick when his parents contacted them three days after the initial report, saying they had found their son and he was safe.
Quick had apparently been staying on the Lone Star college campus and some security guards had given him food and a tent to sleep in, Black said.
Laird said Quick's parents are devastated by the accusations made against their son.
Quick's mother is "the person that knows him more than anybody else in the world. And so, what she knows of him does not fit with what happened (Tuesday). She loves him dearly and his dad loves him dearly. And both of them do not understand what happened," he said.

That guy has been a sicko since he was a little kid!

WASHINGTON—Statement of American Federation of Teachers President Randi Weingarten on the stabbing incident on the Cypress-Fairbanks campus of Lone Star College in Texas:

"Access to adequate mental health services in schools—K-12 and higher education—is imperative to get students the help they need and to protect others. We shouldn't expect academic counselors to substitute for laid-off trained mental health counselors, as Lone Star College does. An important component of school safety is not just commonsense gun control measures but sufficient mental health services.

"The stabbings on the Lone Star campus also exposed failures of its emergency alert system, even though Lone Star had been shaken by a shooting incident on a different campus three months earlier and the Newtown, Conn., rampage had happened nearly four months before. Because the system failed to notify everyone on campus of the danger, many faculty and staff stepped in to help, including alerting classes to lock their doors. After the earlier Lone Star shooting, AFT Lone Star addressed the college's board of trustees about safety measures that should be considered. It is a shame the college didn't implement the suggestions or embrace the union's participation in its decision-making process." 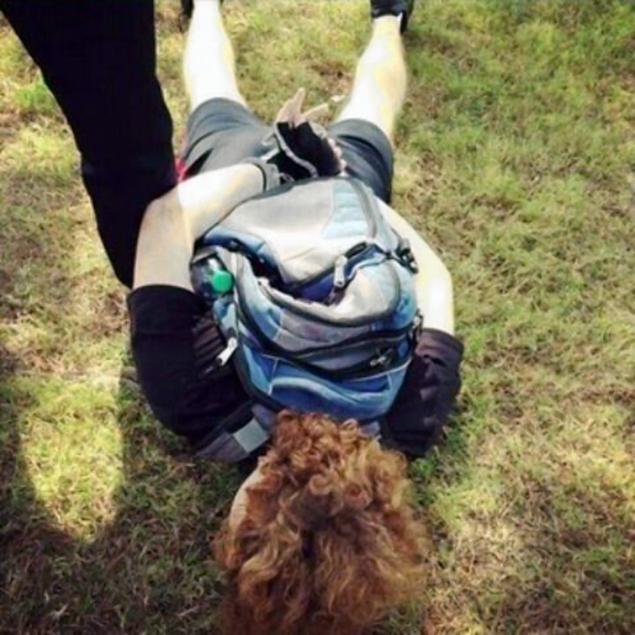 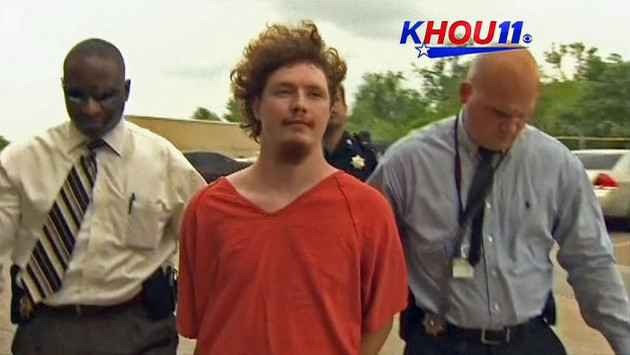 HOUSTON, TX – The man accused of stabbing 14 people on the Cy-Fair campus of Lone Star College will remain in the Mental Health Unit of the Harris County Jail.
Dylan Quick was arraigned on three charges of Aggravated Assault. It was his first appearance before a judge since the April 9th incident.
Defense attorney Jules Laird admitted, “I don’t want him out of jail at this point.”Laird went on to say he is working on getting a doctor to evaluate his client.
Court records describe Quick as a troubled 20-year-old-with fantasies about things like necrophilia and cannibalism.
Police say Quick used a scalpel and an X-Acto knife to attack his victims.
[You must be registered and logged in to see this link.]
_________________
along comes a spider to sit down beside ya

raine1953 wrote:That guy has been a sicko since he was a little kid!

HOUSTON - Dylan Quick, the man who stabbed 14 people at Lone Star College Cy-Fair in 2013, was sentenced to 48 years in prison Thursday.

Quick showed no emotion as he learned his fate in a Harris County courtroom.

"Mr. Quick, you are one of society's worst nightmares,” Judge Maria Jackson said after reading his sentence.

While Judge Jackson told Quick she believes he is mentally ill, she told him the court found no supporting evidence that illness contributed to Quick slashing 14 people with an Exacto knife.

"Hopefully, they feel vindicated,” said Will Cowardin, a prosecutor with the Harris County District Attorney’s Office. ”They feel like the justice system is looking out for them and that things like this don't happen again."

But Quick's lawyers argued their client was deaf and hearing voices telling him to kill people.

"It's a case where he needed treatment and in that case, society did fail him," said Jules Laird, Quick’s attorney.

After the sentencing, Quick's parents were comforted in the courtroom by one of his victims, Karissa Lynn Harris.

"I just want him to get help,” said Harris, as she walked out of the courtroom. "I just feel sorry for them, too. They lost a son, as well as everybody else.”

Quick was in tears during Harris' emotional testimony Wednesday and during surveillance video showing him attacking Xiomara Guerra.

"While he was stabbing me I just remember looking up, and he had this very angry look on his face,” said Guerra. “That face will always be burned into my memory."

Guerra, who is now a senior at Texas A&M says while her three wounds have healed and she's moved forward, she still feels Quick's sentence was too light.

"If he gets out on good behavior and gets out on 20 years I just don't think that's a long enough time,” said Guerra. “I still think he could possibly be a threat to the community."