12 Year Old At Sparks Middle School Used His Parent's Gun To Kill Math Teacher Mike Landsberry & Wound 2 Other Schoolmates Before Turning The Gun On Himself !

12 Year Old At Sparks Middle School Used His Parent's Gun To Kill Math Teacher Mike Landsberry & Wound 2 Other Schoolmates Before Turning The Gun On Himself !

A student opening fire with a handgun he took from his parents. Screaming students running for cover. A teacher, trying to help, shot dead. Two students wounded. The terror lasted just a few brutal minutes.

As authorities investigated, details were still trickling out hours after a deadly shooting Monday at a Nevada middle school.

One official described the scene at Sparks Middle School with one word: chaos.

"It's too early to say whether he was targeting specific people or just going on an indiscriminate shooting spree," said Tom Robinson, deputy chief of the Reno Police Department.

Mike Landsberry, a popular math teacher at the school, was killed in the shooting, Sparks Mayor Geno Martini told CNN.

In addition to his work as a teacher, Landsberry also had served in the Marines and served several tours in Afghanistan as a member of the Nevada Air National Guard, his brother, Reggie, told CNN's "Anderson Cooper 360."

"He was the kind of person that if someone needed help he would be there," Reggie Landsberry said. "He loved teaching. He loved the kids. He loved coaching them. ... He was just a good all-around individual."

Reggie Landsberry said his brother was probably trying to "talk the kid down and protect whoever he could. That sounds like Mike."

One student told "Pier Morgan Live" that she knew the student who shot Landsberry and wounded two 12-year-old schoolmates.

"He was really a nice kid," Amaya Newton told CNN. "He would make you smile when you were having bad day."

He even offered to buy other students something to cheer them up, Newton said.

Newton said she thought the two students who were wounded were friends of the shooter.

She and her mother, Tabatha, said they thought the shooter had been bullied in the past.

Student Faith Robinson said she was standing to the side of one of the school buildings where she heard shots and saw Landsberry killed. She told CNN that she ran into the school and was separated from her friends.

"I start getting really worried and then I was trying to get a hold of my Mom," she said.

Terra Robinson was just a few minutes away when she got her daughter's distressing call.

By the time she got to the school there was a sea of flashing lights and panicked parents, she said.

The superintendent of Washoe County Schools said there were many heroes.

"Including our children who, even though school hadn't started, when the teachers came out, they listened to them and they went into their classrooms immediately," Pedro Martinez said.

Witness: Teacher tried to get student to put gun down

Student Thomas Wing said he was walking out of the cafeteria after eating breakfast when he saw a gun.

He told CNN affiliate KOLO that Landsberry was trying to get the student to put the weapon down. After a gunshot, Thomas started running back toward the cafeteria. He heard another shot.

"I was thinking, oh my gosh, am I going to get out of this? Am I going to die?" he told KOLO. "My heart was pounding faster than I could run."

An emergency dispatch calls released by the Sparks police department indicate Landsberry was shot on the school playground.

Authorities said that first responders were at the school just three minutes after the initial 911 calls.

"I think we were well-prepared. Everybody responded appropriately. I think our first responders did a heckuva job, but it's a sad day for the city of Sparks," Mayor Martini told CNN.

City officials said authorities received emergency calls from students and staff at the school about 7:15 a.m. about an active shooter on campus.

Authorities said students were taken to a nearby high school to meet their parents. School was canceled for the week at Sparks Middle School and for the day at nearby Agnes Risley Elementary, officials said.

"I was deeply saddened to learn of the horrific shooting at Sparks Middle School this morning," Nevada Gov. Brian Sandoval said in a statement. "My administration is receiving regular updates and the Nevada Highway Patrol is assisting at the scene. Kathleen and I extend our thoughts and prayers to the victims and those affected by these tragic events."

Another shooting occurred at an Atlanta middle school in January, the same month a California high school student wounded two people, one seriously.

The mother of a student killed in December's shooting in Newtown said Monday's shooting was reminder of the need to find solutions to keep students safe.

"The unthinkable has happened yet again, this time in Sparks, Nevada," Nicole Hockley said in a statement. "Our thoughts and prayers are with the victims, their families, and the children of Sparks Middle School, who today came face to face with violence that no child should ever experience. It's moments like this that demand that we unite as parents to find common sense solutions that keep our children -- all children -- safe, and prevent these tragedies from happening again and again."

Students described to CNN how they ran into the school screaming and crying when they realized the pops they heard were gunshots just before the morning bell welcomed them back from fall break.

The shooter took a handgun from his parents, a federal law enforcement source who was briefed on the situation told CNN's Evan Perez.

The gunman eventually shot and killed himself with the semiautomatic gun, Sparks Deputy Chief Tom Miller said Monday evening at a news conference.
_________________
along comes a spider to sit down beside ya 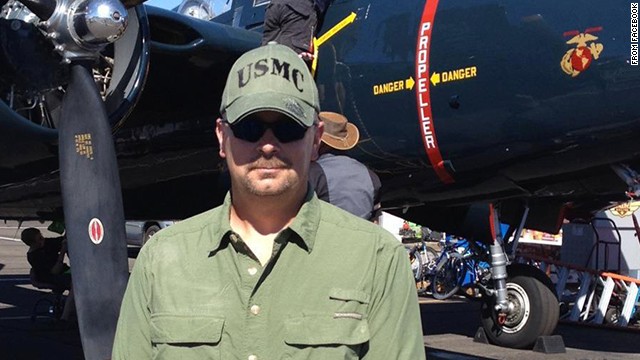 Mike Landsberry (pictured), a math teacher at the school, was killed in the shooting, Sparks Mayor Geno Martini told CNN. In addition to his work as a teacher, Landsberry also had served in the Marines, including several tours in Afghanistan, his brother, Reggie, told "Anderson Cooper 360."
_________________
along comes a spider to sit down beside ya

It didn't surprise Reggie Landsberry that his brother was reportedly trying to stop a student with a handgun from shooting when he was killed.
Math teacher Mike Landsberry was killed in the shooting at Sparks Middle School by a student who brought a semiautomatic weapon. The student also wounded two 12-year-old students.
A witness told the Reno Gazette-Journal that Landsberry intervened at one point.
Reggie Landsberry said that his brother, like their father a former Marine, probably was trying to talk the gunman out of shooting.
"That was the kind of person that Michael was," Reggie Landsberry said. "He was the kind of person that if somebody needed help he would be there."
Reggie Landsberry said it was something they learned from their father, who served in the military for 22 years. His brother loved teaching and coaching at Sparks Middle School, he said.
"He was just a good all-around individual," Reggie Landsberry said.
Mike Landsberry went to Afghanistan on several tours as a member of the Nevada Air National Guard, his brother said.
Sparks Mayor Geno Martini said it was a "devastating" loss.
"It's very unfortunate that (the life of) someone like that, who protected our country over there and came back alive ... had to be taken at his work, at a school," Martini said.
Landsberry joined the Marine Corps in 1986, attained the rank of corporal and served as a field wireman, Marine spokeswoman Maj. Shawn Haney said.
On his school website, the teacher posted pictures of himself hiking in the wilderness and standing with a weapon beside an armored vehicle.
"One of my goals is to earn your respect while you earn mine," he wrote in a message to students. "I believe that with mutual respect that the classroom environment will run smoothly."
A Facebook memorial page posted in Landsberry's honor had more than 2,000 likes by Monday evening.
Friends, former students and others described him there as a great teacher and a hero.