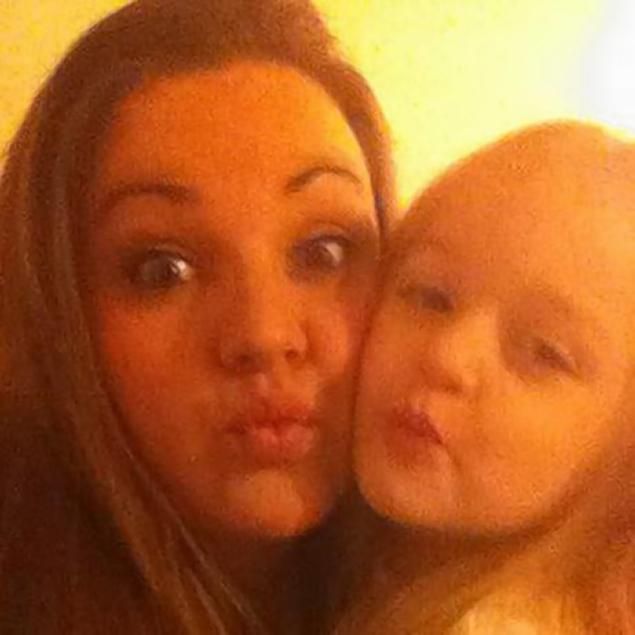 A young mother and her boyfriend were arrested Sunday about 24 hours after police found the woman's 3-year-old daughter sexually assaulted and beaten to death in their Napa, Calif., home, police say.

Sara Krueger, 23, and Ryan Scott Warner, 26, were found around 11 a.m. near a Bay Area Rapid Transit train station in El Cerrito del Norte about 30 miles south of their Napa home.

The tiny blond-haired tot would have been 4 in May, police said.

The cold-hearted mother and her boyfriend were seen leaving their home with luggage around 10 a.m. Saturday.

Both face charges of homicide and murder with special circumstances. There could be a sexual assault charge, as well.

An autopsy was set for Monday. The girl's biological father, an inmate at San Quentin State Prison, has been told of the girl's death.

The family's Napa apartment was the scene of a vigil for little Kayleigh on Sunday. Photos show a pink and white Hello Kitty bicycle, with training wheels attached, sitting on the porch.

About 50 people gathered with candles to remember the little girl, who is shown smiling in photos on her mother's Facebook page.

Krueger describes herself on social media as a "Full Time Mommy! :)" and has captioned several photos of Kayleigh as her "beautiful little girl."

Krueger's handle on Instagram is "kayleighsmami." She describes herself as "the proud mommy of a beautiful and smart lil girl named Kayleigh. She's my world. She's made me a better person :)"

"I can't believe it, I just can't," Kindra Kunkel, a friend of Krueger's, told the San Francisco Chronicle as she sobbed over the loss. "This is not Sara. This is not the girl I know. She fought so hard for her little girl."

The boyfriend, Warner, "moved in about 10 months ago, and it all went downhill from there," the building's property manager, Elizabeth Chechourka told KTVU-TV.

Cops had responded multiple times, she said, on noise violations and reports from neighbors that the girl had been abused.

Police were reportedly at the home just a week before the girl was killed.

"Management sent a letter to them about two and a half weeks ago saying, 'The authorities know about you, and you need to shape up or you're gonna lose your housing,'" Chechourka told the station.

Police told reporters that Warner and Krueger have past criminal records, including drug charges.

The special-circumstances murder charge make the couple eligible for a life without parole sentence, if convicted — or the possibility of the death penalty, the Chronicle reported.

The accused are schedule to appear in court around 2:30 p.m. Pacific Time on Tuesday.

Court documents indicate the body of Kayleigh Slusher was stored in a suitcase and then a freezer for three days, and that the little girl was "beaten to death" before that.

She was so adorable...will NEVER understand how anyone could harm a child.
_________________
Prayers for our little HaLeigh Cummings, wherever she may be!! 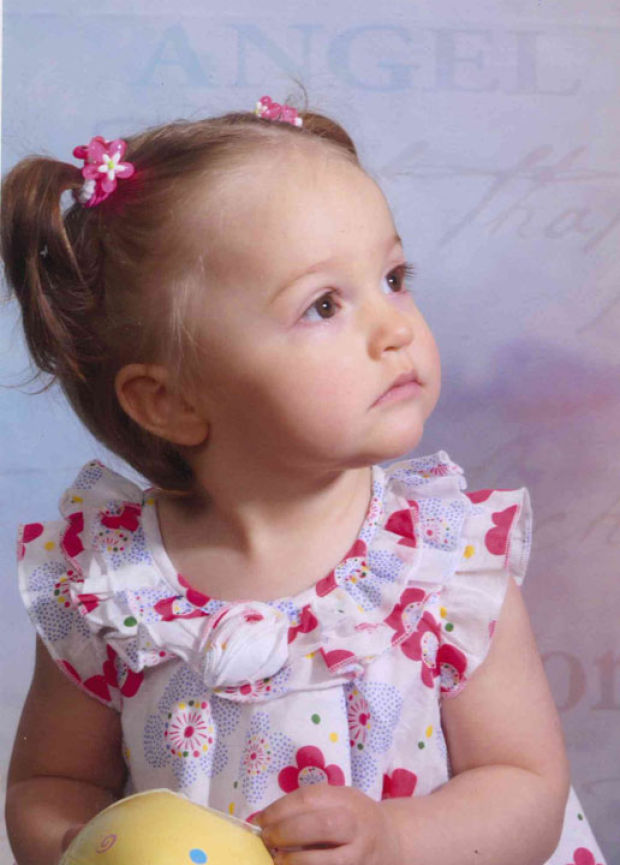 The mother and her boyfriend accused of killing 3-year-old Kayleigh Slusher in January 2014 at their east Napa apartment may become eligible for the death penalty, according to court records.

The Napa County District Attorney on Wednesday filed a motion to add a special allegation of torture against Sara Lynn Krueger and Ryan Scott Warner, making the couple eligible for either life without the possibility of parole or the death penalty, according to court records. The next hearing is April 20.

In February 2014, Krueger, 24, and Warner, 27, pleaded not guilty to murder and assault charges. Each charge carries a maximum penalty of 25 years to life in state prison.

The pair were arrested on Feb. 2, 2014, a day after Napa Police officers found Kayleigh’s body during a welfare check at Krueger’s unit at the Royal Garden Apartments in the 2000 block of Wikins Avenue.

Krueger and Warner were picked up by police at the BART station at El Cerrito del Norte, transported to Napa and booked into the Napa County jail, where they remain in custody.

Krueger, who had no adult criminal record, told police she found her daughter dead when she came home two days earlier, according to a court filing. She placed the girl in a plastic bag and placed it in a freezer for an unknown period of time, according to the court document.

The dead girl was discovered by police in a bed, covered in blankets, according to a court filing.

In March 2014, Napa County Superior Court Judge Mark Boessenecker issued a gag order at the request of defense attorneys. This prohibits parties involved in the criminal proceedings from talking to the media. Records have been sealed.

In other developments, Kayleigh’s father, Jason Slusher, recently was released from prison, where he was sent to serve a three-year term after an unrelated vehicle chase with police, according to court documents.

Cases eligible for the death penalty are a rarity in Napa County.

Napa police and county social workers failed to investigate reports of drug use and abuse in the days before a 3-year-old girl was allegedly killed by her mother and her mother’s boyfriend, according to a federal civil rights lawsuit filed Friday.

The suit, filed in U.S. District Court in San Francisco, says Kayleigh Slusher died in part as a result of the failure of city and county officials to recognize that the girl was “suffering abuse, neglect and was in immediate physical danger in her home due to the conduct, crimes and activities” of her mother, Sara Krueger, and Krueger’s boyfriend, Ryan Scott Warner.

Police and county social workers are liable “for their inexcusable violations of mandatory duties to protect Kayleigh, when they knew about rampant drug use, crime and abuse in Kayleigh’s home,” leading to the girl’s death last year, said Michael Haddad, who is representing the girl’s father, Jason Slusher, and the girl’s paternal grandparents, Benny and Robin Slusher.

Haddad said he placed more of the blame on officers who visited a second-floor apartment at 2060 Wilkins Ave. on Jan. 29, 2014, and took no action, despite noticing that Kayleigh appeared gaunt and sick and had bruises on her face. Officers contacted a man later identified as Warner, who was clearly under the influence of drugs, but did not arrest him or search the home, the suit says.

Instead, an officer called Robin Slusher and told her that “everything appeared normal at Kayleigh’s home” and that police would “keep an eye on the apartment,” the complaint says.

The day after the police visit, Krueger and Warner killed the girl, prosecutors say. Her body was found on Feb. 1, 2014, and a day after that, the couple were detained by BART police at the El Cerrito del Norte Station. They admitted to investigators that they hid the child’s body for a time in a suitcase inside a freezer, authorities said.

An autopsy concluded that Kayleigh died of multiple blunt impact injuries to her head, torso and extremities due to child abuse and neglect, authorities said.

Krueger and Warner have pleaded not guilty to charges of murder and assault on a child resulting in death. In April, Napa County prosecutors added the special circumstance of torture, meaning if they are convicted, the two could face the death penalty or life in prison without the possibility of parole. Prosecutors will decide later whether to seek lethal injection.

A Napa woman and her boyfriend were ordered Tuesday to stand trial in Napa County Superior Court for their suspected involvement in the murder of the woman’s 3-year-old daughter last year.

Sara Lynn Krueger, 25, and Ryan Scott Warner, 27, will be tried in the death of Kayleigh Slusher on the charges of murder with torture and assault on a child producing great bodily injury or death, Napa County District Attorney Gary Lieberstein said Thursday.

The girl’s body was found on a bed in Krueger’s and Warner’s Royal Gardens apartment at 2060 Wilkins Ave. in Napa on Feb. 1, 2014 after a neighbor called police to make a welfare check, Napa police said.

Slusher had suffered blunt force trauma and her body was put in a freezer before it was found in a suitcase left on the bed of the apartment, according to Napa police.

Krueger and Warner left the apartment with luggage, and BART Police Department officers contacted them at the El Cerrito del Norte BART station after police received an anonymous tip that they were in an El Cerrito restaurant.

Napa police said they had been to the couple’s apartment on Jan. 29 after someone called them to report Krueger was under the influence of drugs and was not feeding her daughter, Napa police said.

Police found no signs that Krueger was under the influence of drugs or that the child was in danger, Napa police said.

Police had been to the apartment numerous times before between June 2012 and February 2014 but not in response to any violent events, Napa police Capt. Jeff Troendly said at the time.