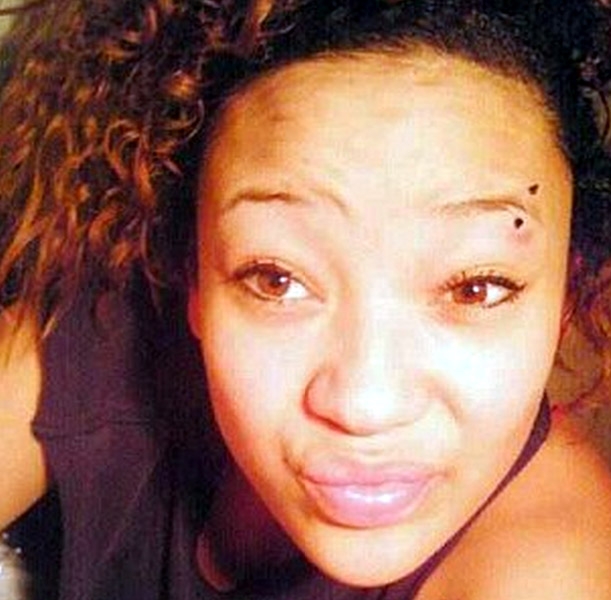 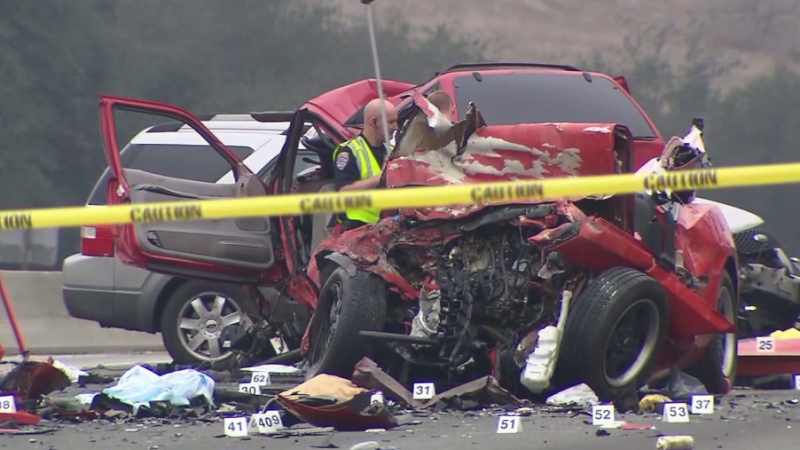 A 21-year-old Fontana woman involved in a crash that left six people dead has been charged with numerous counts of murder, the Los Angeles County District Attorney’s Office announced Thursday.

Olivia Carolee Culbreath remained hospitalized after the crash early Sunday on the 60 Freeway in Diamond Bar.

It was not known when she would be able to be arraigned in court, the DA’s office stated.

She was charged with six counts of murder after allegedly driving a 2013 Chevrolet Camaro the wrong way on the interstate, colliding with a 1998 Ford Explorer.

Witnesses told CHP investigators that the Camaro was traveling more than 100 mph. Evidence of alcohol consumption was found at the scene, CHP officials said.

All occupants of the Explorer — a family from Huntington Park — were killed.

Culbreath’s 24-year-old sister and a friend, who were riding in the Camaro, were also killed. A driver whose Ford Freestyle was hit by the Explorer after the initial collision said he was “lucky” to be alive.

After the collision, Joel Cortez, 57, said he sat dazed in his car.

“I heard people talking … ‘Oh my God, there are bodies all over the place,’” he recalled.

The collision, which has generated national attention, left a gruesome scene of twisted metal and debris scattered across the roadway.

Culbreath was being held in a hospital jail ward at Los Angeles County-USC Medical Center on $6 million bail.

She was being treated for a broken femur and a ruptured bladder, the California Highway Patrol stated after the crash.

She had initially been arrested on suspicion of felony driving under the influence of alcohol causing great bodily injury or death, and of felony manslaughter, according to CHP.

No DUI-related charges had been filed, according to the DA’s office.

She faces a maximum sentence of life in prison if convicted of the six murder charges, the DA’s office stated.

The victims of the crash were identified as: Gregorio Mejia-Martinez, 47; his wife, Leticia Ibarra, 42; their daughter, Jessica Jasmine Mejia, 20; Jessica’s grandmother, Ester Delgado, whose age was not known; Maya Louise Culbreath, 24, of Rialto; and Kristin Melissa Young, 21, of Chino.

A vigil organized by a local chapter of Mothers Against Drunk Driving was held Wednesday night in Diamond Bar.

It amazes me that the drunk that caused the accident usually survives. How SAD!!
_________________
Prayers for our little HaLeigh Cummings, wherever she may be!!

Strangely enough there's a theory for why that happens...
It is thought that perhaps increased relaxation or limpness at the time of an accident, aids the drunk in walking away uninjured.
Also further research suggest that when a person is injured the body goes into emergency preservation mode — tripping a cascade of physiological panic buttons that can ironically end in death — alcohol in the blood stream seems to interfere with the body's ability to panic.
_________________
along comes a spider to sit down beside ya 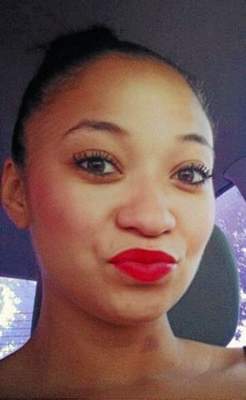 Attorneys have delayed the arraignment again for a Fontana woman charged in a drunken-driving crash that killed six people.

Previous arraignment hearings had been delayed either for medical reasons or because attorneys needed to review the case, which includes more than 800 pages of discovery.

It was unclear why Wednesday’s hearing was postponed.

Culbreath has been charged with six counts of murder in the deaths of Gregorio Mejia-Martinez, 47; Leticia Ibarra, 42; Jessica Jasmine Mejia, 20; and Ester Delgado, all of Huntington Park; Kristin Melissa Young, 21, of Chino; and her sister, Maya Louise Culbreath, 24, of Rialto.

California Highway Patrol officers said Culbreath was driving her red Chevrolet Camaro the wrong way on the westbound 60 Freeway on Feb. 9 in Diamond Bar when she slammed into a Ford Explorer. All occupants of the Explorer died, as did Culbreath’s two passengers.

Culbreath has been in custody since the crash, first in the hospital and then in the Twin Towers Correctional Facility in Los Angeles.

Olivia Carolee Culbreath Pleaded Not Guilty To 6 Counts Of Murder

Olivia Carolee Culbreath pleaded not guilty to six counts of murder at the Clara Shortridge Foltz Criminal Justice Center. She is expected to return to court March 10.

In January, a Superior Court judge ruled that sufficient probable cause existed to support the charges against the 22-year-old Culbreath at the conclusion of a preliminary hearing in Pomona Superior Court. She was ordered held over for trial on the charges.

“We didn’t anticipate any changes. There wasn’t anything to change,” said Daniel R. Perlman, one of Culbreath’s lawyers, after the Wednesday hearing.

Culbreath, who uses a wheelchair, was brought into court dressed in a hospital gown.

The judge gave her the opportunity to change into street clothes, Perlman said, adding it was the first time his client had been able to wear something other than a hospital gown in close to a year.

The earliest Culbreath can go to trial is in 90 days, but her lawyers estimate it could be about six months.

Perlman said he and his colleagues have investigations to carry out but could not discuss the matter further.

Culbreath is accused of driving a Chevrolet Camaro east on the westbound 60 Freeway at speeds close to 100 mph on Feb. 9, 2014. About 4:45 a.m., she allegedly was involved in a wrong way, head-on crash in Diamond Bar, the California Highway Patrol said.

• Photos: 6 killed in wrong-way crash on 60 Freeway in Diamond Bar

The car crashed head-on into a sport utility vehicle, the CHP said. Another vehicle then crashed into the SUV.

Two women in Culbreath’s car died. One of then was Culbreath’s sister, Maya, 24, of Rialto. The other woman was Kristin Melissa Young, 21, of Chino.

Four Huntington Park residents who were in the SUV also died. The four were thrown from the vehicle. They were identified as Gregorio Mejia-Martinez, 47, Leticia Ibarra, 42, Jessica Jasmine Mejia, 20, and Ester Delgado, 80.

Lawyers for a Fontana woman suspected of killing several people in a wrong-way crash on the 60 Freeway last year appeared in Superior Court Tuesday.

Attorneys in the case of Olivia Carolee Culbreath discussed the status of the case and are scheduled to return to Clara Shortridge Foltz Criminal Justice Center in Los Angeles on May 13 for a pretrial hearing.

Culbreath’s attorneys will return to Pomona Superior Court March 11 for an unknown hearing.

Culbreath, 22, was not in court Tuesday.

She is accused of driving a Chevrolet Camaro east on the westbound 60 Freeway at speeds that were close to 100 mph the morning of Feb. 9, 2014. At about 4:45 a.m. Culbreath allegedly was involved in a wrong-way, head-on crash in Diamond Bar, the California Highway Patrol said.

The car crashed head-on into a sport utility vehicle, CHP said. Another vehicle then crashed into the SUV.

Six people died as a result of the crash.

The other victims were four residents of Huntington Park who were traveling in the SUV and were thrown from the vehicle. The four victims were Gregorio Mejia-Martinez, 47, Leticia Ibarra, 42, Jessica Mejia, 20, and Ester Delgado, 80.

During a January preliminary hearing CHP investigators said that in the course of their investigation they spoke with people in a Fullerton bar and grill who stated Culbreath had been drinking at the establishment hours prior to the crash.

One man said Culbreath gave him and a relative a ride home but she followed the rules of the road.

But one of Culbreath’s lawyers said his client could not be tied to the wrong way crash or to driving under the influence.

Culbreath is being held at Twin Towers Correctional Facility in Los Angeles on $6 million bail.

POMONA >> A judge on Wednesday fined two defense attorneys representing a Fontana woman accused of causing the death of six people during a wrong-way crash in Diamond Bar.

Attorneys Robert Sheahen and Daniel R. Perlman were sanctioned in connection with the release of photographs of their client, Olivia Carolee Culbreath, in a courtroom following a hearing, said their lawyer, Mark Daniel Melnick.

At least one of the photos appeared in this newspaper.

The photos, taken in January, showed Culbreath in Pomona Superior Court speaking with Kelly Sheahen Gerner, a member of her defense team, with members of the public in the background.

Falls did not level a fine against Sheahen Gerner but he did sanction the two other members of the attorney team.

Sheahen said after Wednesday’s hearing he had no comment.