~NO DISCUSSION~You may have the information to solve this case. Please contact administrator with tips or leads.

~NO DISCUSSION~You may have the information to solve this case. Please contact administrator with tips or leads.

Hi everyone this is a break down of the events of the 28 th of June...This post will be edited/updated as new info comes along ....If you have ANYTHING not covered here please join us at the link, if there's anything confusing you here also join us in this thread >

And askkkkk questions !!! no1 bites :D

Red is new info or queries

Leah is in a relation of 8 months with NM(split once in this period due to Cory concerns of his effect on Leah she was tearful and he was older ) ..Unknow to the family a school teacher Sharon Nelson , as stated physical abuse did appear in their relationship, she observed Leah on occasion hitting NM and he would respond in defense , and was known to have a flash temper..It as been noted that Cory had booked an appointment for Leah at a health clinc ?? , to discuss birth control..

NM and LF and LF spent time at LF's home located at 1173 Knott Street, Coquille, OR 97423 cleaning NM's car,its been graduation and theres some writing on the car to the effect of "2000 rock" etc ...Car is a '67 blue Mustang
LF/NM leave ..Cory as stated as its not a school night ,LF is allowed out to 11pm..They pick up BB, then to NM's home at 56246 Baker Road for videos
They travel to BB's grandparents (who are on holiday) home at 2008 North Fir to watch the videos
NM/BB leave to pick up food, they come back and they eat...
In one affidavit it seems BB's girlfriend was also at the home < Unnamed GF, we have no info at all about this young lady ..


7-9pm-NM States he drove around town then to the Haga residents then Fast Marts then drove to pick Leah up.. But 3 male friends report meeting with NM and smoking marijuana at Johnson Mill Pond. He was driving the blue Mustang. (Note: Later in the evening they saw him again driving a maroon Thunderbird his parents car.)
NM indicates to the group hes going to pick Leah up

7.00-9pm
LF wants to go jogging with SM, SM's mother denies request and there is a shouting match between mother/daughter, within hearing range of LF...

The questions raised in the forum about the timing/reason of jog , have been cleared up by Cory's talk with SM : FACT They wanted to go for JUST a jog and it was no ruse to go somewhere ..
The questions raised in the forum about going for a jog so close to Leah's lift : FACT The arguement between SM and her mother went on till close to 9 , but they had requested to jog earlier..

LF leaves SM's home alone on foot approximately at 9.00
The questions raised in the forum that it appeared odd leaving so soon considering your lifts expected , FATC : Cory as confirmed with SM that LF was annoyed over the arguement she overheard ..Apparently LF had the habbit of jogging with SM and then NM arriving and driving off , and leaving SM to return home on her own , and she had overheard SM mum state this as a reason why she refused permission...

Its worth noting that SM said Leah had seemed strange this evening , but DF mentioned NM told her that he and Leah had argued earlier , SM had asked Leah to come around without him which had annoyed him... Cory thinks this could be the reason for Leahs strangeness considering how volatile the two were...

The assumption is she is walking back to her home on Knott Street..

9.00-9.15 NM shows up at SM's approximately 9.00/05 to pick her up and learns LF has left , it would appear they've missed each other by minutes.. He drives up Central to Knott and back again looking for LF,. Cory as stated this trip would be roughly 6 mins excluding stopping or talking to anyone so roughly NM would be returning back down Central at 9.10-9.15..


9:05-9:15pm-
LF seen by a witness passing McKay's Market on Central the witness states she looks angry arms crossed and eyes down..This would place her walking past a telephone and , people have wondered if she rang anyone , Cory felt this was doubtful..
LF seen by 2 witnesses passing Hunter's Restaurant on Central, north of McKay's
LF seen by witness passing Oregon Federal Credit Union, north of Hunter's

9:15-9:30pm-
NM shows up at Denny's Pizza to ask DF if she has seen LF Then says "he as to go because someones in the car"..He leaves we presume still in the Mustang.. (Note: NM did not mention this stop at Denny's to the police, DF did)

This section of LE notes are very ambigous !! If NM did state this at 9.15-9.30 this could be Kristen with NM..Kristen is a local girl known to NM ,Cory as stated she wasn't a friend of Leah's , and that Leah would more then likely be annoyed she was driving around with NM ...There are rumors that she was jealous of Leah....Cory as stated that NM told her on the 29th , that Kristen had helped him look for Leah...HELP NEEDED

9:45-10pm-
2 witnesses see NM at Fast Mart on Central in maroon Thunderbird parents car , one witness states the time as between 9-10 another after dark which would be later then 9.45...

It would take NM around 15 round trip to drive to his parents and drive back to of been seen at Fast Mart..This is presuming the car was not brought to him or parked locally...

10:00-10.15pm-
NM goes back to SM's and after a short conversation they pursuade NM to call Cory to check if LF's returned, she is not there...The police reports this as happening at 10.15 but Cory remembers the call being closer to 10.07..Cheri as told Cory that she remembers NM had the Mustand when he returned at 10.15 though this isn't a fact , it would make sense considering NM was pulled over in the Mustang by 10.30...

10:30pm-
NM stopped by LE in blue Mustang..NM states to Cory the following day that he had been pulled by LE for a broken light ,we can only presume this was the reason...Also Cory remembers that NM stated to her in the following day's that he informed the police that he was looking for Leah,its unknown if he said this at 10.30 or later when hes pulled over in the early morning...Though we now know he smoked weed earlier in the night , we know of no one observing that NM appeared stoned/drunk etc not the police,Cheri or her mother to our knowledge ...

That hes now in the Mustang again , this means that NM as driven back to change his cars again another 15 min return journey...Again this is presuming the car was not brought to him or parked locally

This section of LE notes are very ambigous !! If NM did state this at 11-11.30 we can presume its BB with him , because NM as stated to LE he picked him up at 11.00 ish, i guess Kristen could be with them too...Kristen is a local girl known to NM ,Cory as stated she wasn't a friend of Leah's and that Leah would more then likely be annoyed she was driving around with NM...There are rumors that she was jealous of Leah...Cory as stated that NM told her on the 29th , that Kristen had helped him look for Leah , as well as BB , we have no idea if this was at the same time as BB..... HELP NEEDED ..


11:30pm-
TM finish work at 11/11.30 he finds Nike shoe off Elm Street and picks it up thinking it might belong to one of his children or other neighborhood children (Note: this is different section of Elm, close to BB's grandparents on the other side of town) This is two hrs after Leah's last sighting , some people have raised question about this episode , but Leah went missing from 9.15 onwards , and its inconceivable that she wouldn't of been seen between 9.15 and 11.00 when this genetlemen was returning home from work...

2:30am-
NM goes to LF's home, sees a light in her room and attempts to contact her through the window. No response so he goes home ,but doesn't knock or talk to family..

Morning of 6/29-
CC contacts NM, says LF hasn't come home and they go looking for her along Central
This trip at one stage includes DF and NM and Cory waits at home for phone calls ...Its at this time Coory is told two things from NM that at one stage in the night he had Kristin with him looking for Leah , when Cory looks at him shocked he states their just friends...Its now he also mentions his concern about his headlight , we can presume its the headlight that got him pulled over by the LE in the night
6/29-
LE (local PD) goes to BB's grandparent's home,(It must be noted that the granparents were on Hols) no one is there. On the deck they see a white men's sleeveless t-shirt as well as beer cans. They do not collect the shirt.
LE realizes later LF was wearing a men's t-shirt (“wifebeater”) and return to BB's grandparent's home. The deck area has been cleaned and the shirt is gone.
NM provides LE with a picture of LF taken on 6/28
SN interviewed, indicates there appeared to be abuse in NM/LF's relationship, on occasion LF would hit NM and he would strike back, NM has a “flash temper”.

7/3-
TM comes to LE (local PD) with the shoe, realizing it might be connected to LF's disappearance

7/6-
Search warrant executed on blue Mustang.
Items seized were vacuum sweepings and duct tape end, ¾ inch piece. One roll of film and a partial roll of photos were also taken by the crime lab.

Heres the link were this is all being discussed... 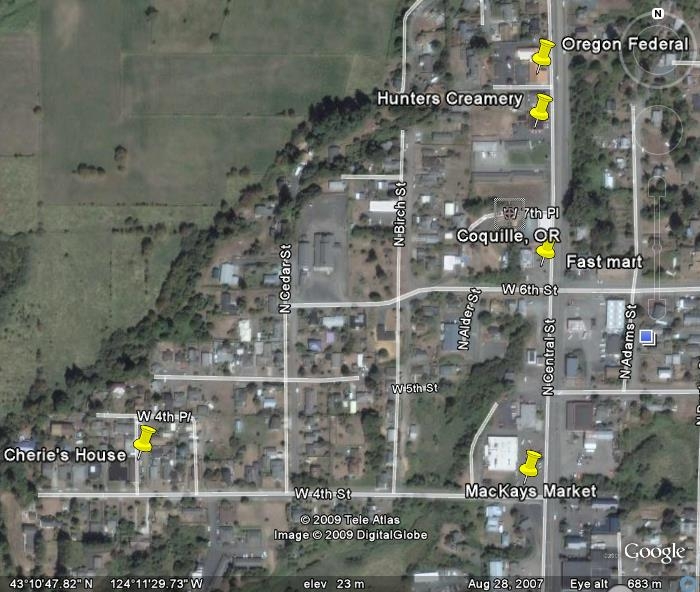 Intersection of Central and Fairview, as well as Elm st. that runs next to the cemetery. This is the approx location of the 1st shoe found by the passerby Gentleman who thought it belonged to his kids. 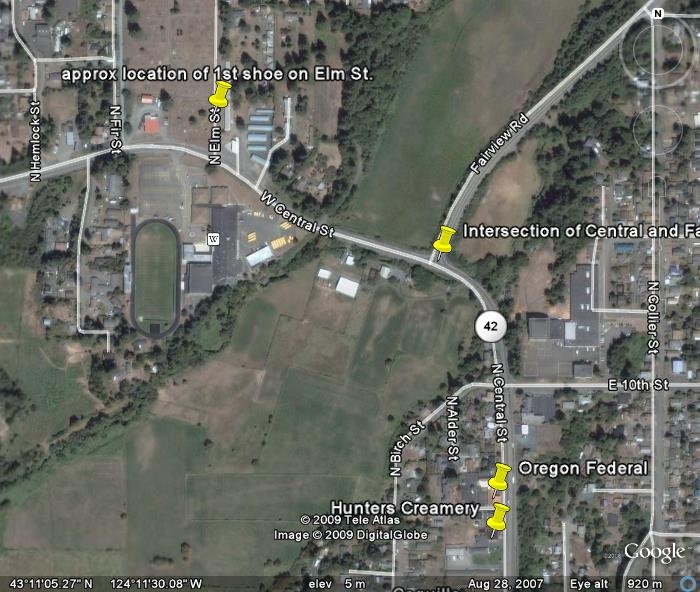 This is a view of the distance between Leah's house, BB's Grandparents and the cemetery. 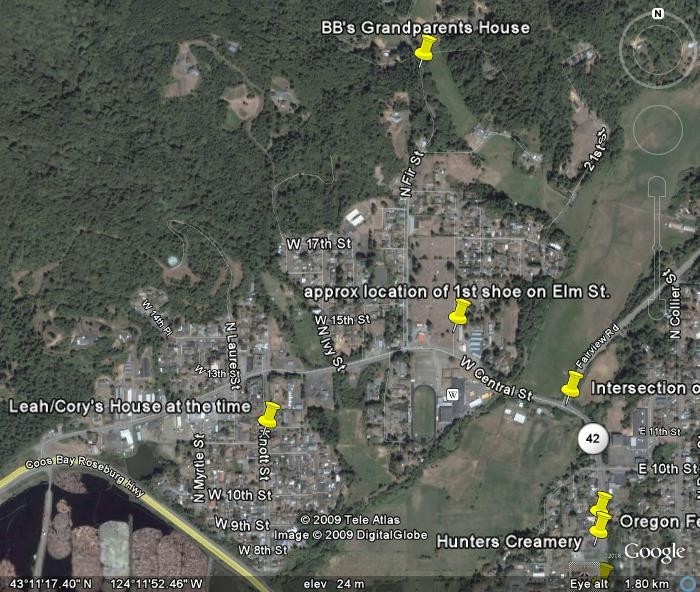 Distance from Nick's house to City of Coquille. Note that Cory has made this drive herself and states that it only takes 15 minutes round trip. 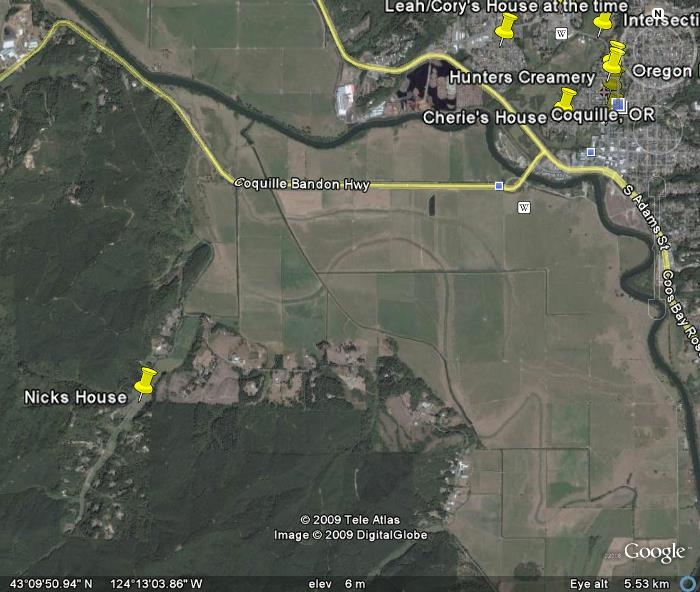 Intersection of Fairview Rd and Lee Valley Rd. and also the "approx" location of where Leah's precious little body was found 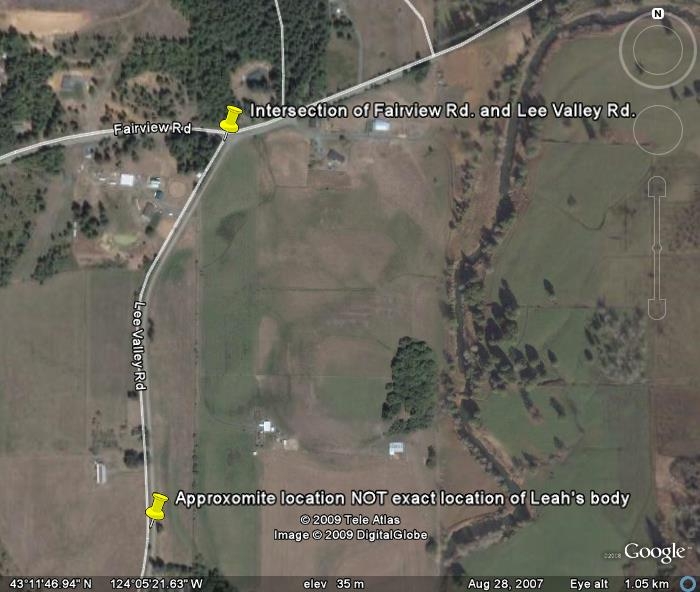 Distance "roughly" between Fairview and Coquille, it is stated that Leah's body was discovered 9 miles out of Coquille. 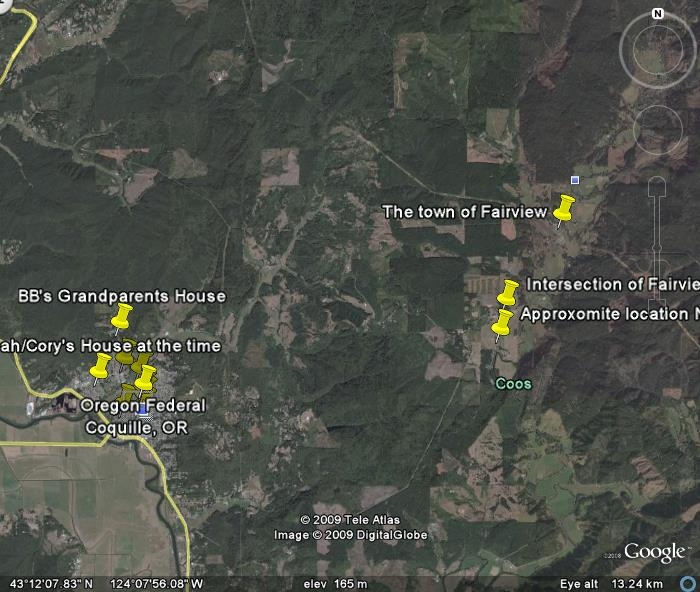 Another Map for our thread :) 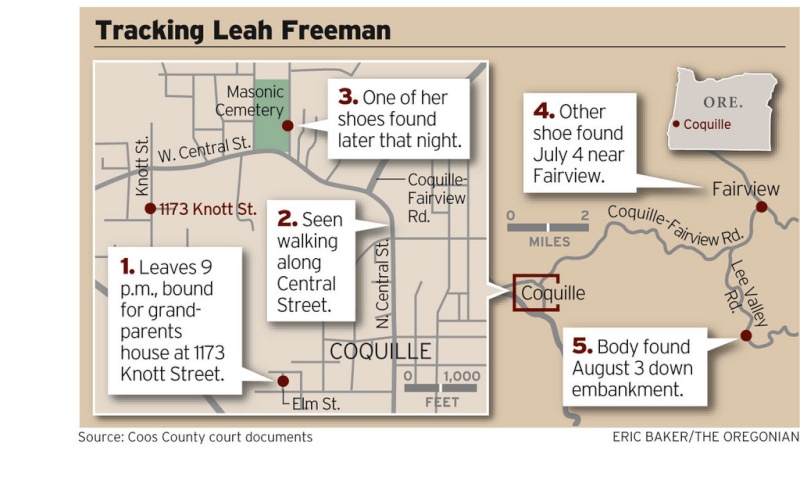