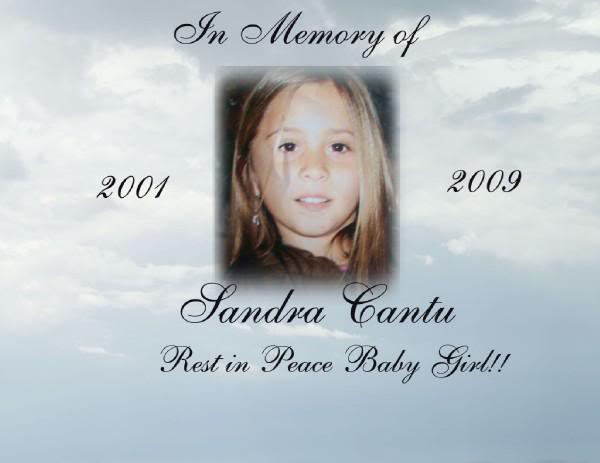 TRACY, Calif. -- Sandra Cantu's body was found Monday inside a piece of luggage pulled from a San Joaquin County irrigation pond, Tracy police said. The 8-year-old girl disappeared more than a week ago.

Cantu, a student at Jacobson Elementary School, disappeared March 27 from inside Orchard Estates Mobile Home Park just off West Clover Road. Home security video of her released Saturday was taken shortly before she disappeared and showed the girl skipping down the road.

you did such a beautiful job with Sandra's portrait. You made me tear up all over again. Rest in peace sweet child.

Was just thinking about this sweet little angel today after all of the talk about how her accuser has been acting in jail. R.I.P. Sandra. :littleangel:

STOCKTON, Calif. -- The San Joaquin County district attorney is seeking the death penalty against former Sunday school teacher Melissa Huckaby, who is charged with kidnapping, raping and killing 8-year-old Tracy resident Sandra Cantu.
Cantu's body was found stuffed in a suitcase pulled from an irrigation pond north of Tracy in April. The girl's disappearance, the discovery of her body and her funeral drew national attention.
A grand jury indicted 28-year-old Huckaby in July in connection with the death, and she pleaded not guilty to charges on Thursday.
Huckaby in June pleaded not guilty to charges brought by the district attorney, but the grand jury indictment superceded the DA's charges.
Huckaby asked for a new attorney in her case on Thursday, but the judge denied her request.
A trial date for Huckaby has not been set.
The prosecution wants the trial to start within the next 60 to 90 days, but the defense said it wants the trial to start in about a year and a half. The judge said she is inclined to start it in March.

Tracy murder suspect Melissa Huckaby acted up and tried to hurt herself before her last court hearing, according to San Joaquin County jail records.

The 28-year-old accused of kidnapping, raping and killing 8-year-old neighbor girl Sandra Cantu is being held without bail at the San Joaquin County Jail. A grand jury handed down an indictment in August that also charges her with drugging a 7-year-old girl in January and a 37-year-old man in March. She pleaded not guilty last month to all the charges.

An incident report from the jail says that a couple days before her Aug. 17 court hearing, Huckaby hid behind a mattress and wrapped a blanket around her neck. She was taken to a “safety cell” and refused to eat dinner.

An Aug. 12 report says that a deputy found Huckaby lying on the floor by her bed. She said she felt dizzy and then passed out. The jail ordered a psychiatric nurse to check up on the inmate.

About a half-hour later, another jail employee found Huckaby sitting next to her bed with a trash can. When the employee asked her what was wrong, Huckaby replied, “I took pills,” according to the incident report. An ambulance took her to a doctor for treatment, records show.

Huckaby apparently acted up the morning of her last court appearance in an attempt to get out of going to the proceeding. She showed up in court with a couple fresh scratches on her forehead and on her left forearm.

Huckaby’s ex-husband accused her of trying to kill herself before. In a Southern California court when Johnny Huckaby was arguing for custody of their 5-year-old daughter, he said his ex-wife tried to kill herself by swallowing razor blades the day Sandra’s body was found April 6.

The Jacobson Elementary School second-grader went missing on March 27 and her body was found stuffed in a suitcase days later. The girl lived a few doors down from Huckaby in the Orchard Estates Mobile Home Park.

Huckaby acted up in jail, possibly tried to kill herself

More than 70 people testified before a secret grand jury that charged Huckaby with murder and three enhancements that could qualify her for the death penalty: kidnapping, lewd and lascivious acts on a child and rape by instrument. A separate count charges her with having sex with a child younger than 10.

Huckaby has yet to enter a plea, and is due in court on Sept. 10 in Stockton. A gag order bars anyone involved with the case from speaking publicly about it.

Prosecutor Thomas Testa said at the last hearing that the case is a death penalty case until otherwise indicated.

how did she get pills in jail?

how did she get pills in jail?

I think they still treat you in jail for depression and such, so maybe she was given her pill and she was hiding them under her tung or something.. People in mental institutions do that crap all the time, so who knows.. or maybe she made it all up to get out of her Court Apperance??

Bump.
Had Sandra on my mind this morning. R.I.P.

Thank you Critter for bumping this case back up! She is always on my mind too! Breaks my heart that we can't even trust our kids friends parents anymore!

Whenever I see images of her skipping along with no idea what is fixing to happen to her. It just breaks my heart. She looks so happy, so alive. MH is some kind of crazy :b***h to have done what she did to poor Sandra.

I completely agree, critter. I think she has a fried brain.

For some reason I have been having Sandra Cantu on my mind a lot this summer. Went in just now to look at her picture and see if any news. I was shocked to discover it has been a year since she skipped across her neighborhood street, smiling, not a care in the world; until the monster crossed her path.

The autopsy report for Sandra Cantu, the 8-year-old Tracy girl who was killed in 2009, will forever be sealed from public view.
Under a ﻿2010 state law, Sandra's family requested the report be sealed. The sealing is not automatic. A request must be made by a qualified family member -- a biological or adoptive parent, spouse or legal guardian -- after a person is convicted and sentenced for committing the crime
he state law Sandra's family members used was enacted by then-Gov. Arnold Schwarzenegger on Sept. 25, 2010.
Stewart Tabak, the attorney representing Sandra's family, said there is a line between privacy and the public's right to know. "The family wanted the gruesome details of this little girl's autopsy results kept private for one important reason: it's nobody's business," Tabak said.
Tabak said he was not worried about the general public, but the media seeking all the details about the second-grader's death.
Bay Area News Group and other media outlets had petitioned to open the autopsy results and other court documents surrounding Cantu's case.
The family had sued to keep that document private, but the lawsuit was dismissed because the state law accomplished what the family wanted.

:cheering: no one needs to know.

and the only reason the news media was hoping to have it was to boost their ratings!
Disgusting the lengths they'll go through!
I'm glad that the memories of Sandra's life won't be defined by the manner in which her life was taken.
What we know already is bad enough!
_________________
along comes a spider to sit down beside ya

You are so right Nite. It's bad enough that her family has to know what that poor little girl went thru', no reason at all for the public to know.