Authorities say a pregnant woman was found fatally stabbed in a Tacoma suburb and an Amber Alert was issued for her missing 9-month-old daughter.

The News Tribune reports neighbors say a man dropped the 21-year-old victim off Monday evening at a duplex. They say she yelled, "He's killing me" as she got out of the vehicle.

The woman, whom authorities did not immediately identify, died in the kitchen of the home.

The woman's says a 2-year-old son inside the home was not hurt. He has been placed in protective custody.

The newspaper says court records indicate Lester has been convicted of first-degree robbery and first-degree theft.

Joseph Lester and Keisha Lewis spent part of Monday working on their relationship with their baby girl.
But later in the day, the two got into a fight that left 21-year-old Lewis dead of stab wounds and her boyfriend on the run with their 9-month-old daughter.
Hours later, Lewis, 23, accompanied by a lawyer, turned himself in to police at Good Samaritan Hospital in Puyallup and handed over his baby girl unharmed.
Police say Lester and Lewis fought in the front yard of a duplex in the 6000 block of 57th Avenue West in University Place where Lewis was living.
She was stabbed several times and died in the kitchen with her toddler son and godmother nearby.
Pierce County prosecutors are expected to charge Lester, 23, today in connection with the slaying.
Investigators on Tuesday were piecing together what sparked the fatal confrontation that led to Lewis’ death.
Meanwhile, the baby girl and Lewis’ toddler son were placed in state protective custody while social workers sorted out where they should go.
“She was all smiles at the hospital,” sheriff’s spokesman Ed Troyer said of the baby. “She was smiling and laughing.”
The turn of events left Lester’s mother baffled.
“We don’t know what happened,” said Cassandra Spencer, who has raised the 9-month-old since she was born. “I know they had their problems, but not to this extent.”
Spencer said Lewis and her son had been spending more time with their daughter, including visits to Spencer’s home for dinner.
“They’d been keeping the baby for a couple days to get to know her,” she said.
Spencer didn’t want to talk in detail about why she’d been raising the girl since birth. She said her son and Lewis had issues but wasn’t more specific.
“They are kids, they are young,” Spencer said. “I am hurting for both of them.”
Lester and Lewis had a history of disputes, Troyer said. A month ago, deputies went to the University Place home after Lewis allegedly stabbed Lester. The two were not cooperative with investigators, and the case went no further, Troyer said.
There were conflicting reports from investigators and relatives on whether Lewis and Lester were still together. A family friend said she was pregnant with Lester’s baby.
Kathleen Gooden, a family friend of Lewis, said she wants more answers.
“I want to see what went down,” Gooden said. “Keisha’s gone. I don’t understand.”
Though Lester and his daughter were the focus of an Amber Alert on Monday, he was not expected to be charged with kidnapping his daughter, Prosecutor Mark Lindquist said.
To charge a person with kidnapping, prosecutors must demonstrate the suspect abducted the victim and held the victim for ransom or caused physical harm.
“He brought the 9-month-old to the scene, and the child is his,” Lindquist said. “There are no facts to support a kidnapping charge.”
Though Lester has been convicted of three felonies in his life, he was not a candidate for a sentence of life in prison without the possibility of release under the state’s “three strikes” law.
His convictions were for first-degree theft, first-degree robbery and attempted first-degree robbery. Only the first-degree robbery conviction was a strike offense, Lindquist said.
Under Washington law, a majority of felonies are not considered strike offenses. Only serious, violent offenses, including murder, are considered strike crimes, Lindquist said. 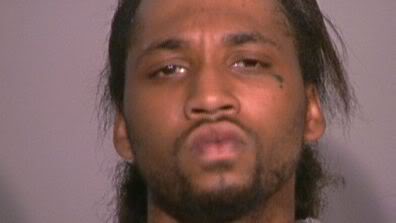 glad they found the baby.

Keisha Lewis took her last breath in her best friend's arms, and now that friend is speaking out about the burst of violence that shattered a family.

Latasha Taylor was with Lewis Monday night when she was stabbed to death outside of her University Place home. Investigators believe Lewis' former boyfriend, Joseph A. Lester, brutally murdered her before fleeing with their 9-month-old daughter.

Taylor said she spent the past two days with Lewis and knew that she and Lester had a turbulent relationship and had been fighting about the couple's young daughter.

Pierce County Detective Ed Troyer confirmed that Lewis and Lester got into an ugly altercation just a few weeks ago that ended with Lester being stabbed in the leg.

Taylor believes that earlier altercation could have played a role in last night's attack.

She said Lester came over last night and Lewis went outside to talk to him. Moments later she heard someone screaming for help and went outside to find Lewis covered in blood.

Taylor said all she could do was hold her best friend and listen to her last words.

"She said take care of her son. Make sure Jayvon was okay," she said.

Two-year-old Jayvon is Lewis' son from another relationship. The boy and his nine-month-old sister, who was found safe last night after Lester turned himself in, are now in state protective custody.

The two best friends had also recently agreed to go to school together to get into nursing. Instead, Taylor comforted her friend during her last moments.

"And I told her to hold on and I told her I loved her," Taylor said. "And she looked at me and stopped breathing."

Lester is now in jail, and we're learning more about why he wasn't under state supervision at the time of last night's murder.

A judge ordered Lester to be supervised for 36 months when he was released from prison on a robbery conviction in 2009. But thanks to a newly-passed law, Lester was not under supervision.

The Department of Corrections was forced to stop supervising 10,000 offenders after a 2009 law was passed to save money, and because Lester was classified as low or moderate risk, he was one the offenders lost in the shuffle.

Lawmakers said research showed ending the minimal supervision for these types of offenders wouldn't increase crime rates. A report on the impact of the new law will be presented to the legislature next month. Meanwhile, the governor has ordered the DOC to look at even deeper cuts due to a growing budget shortfall.

Keisha Lewis was 4 months pregnant Lester's child and another person was raising the 9 month old child that she already had with Lester.
HUH???
_________________
I've never been willing to sacrifice functionality for beauty ~ My Father

Despite her troubles, she said Lewis was a good person and had big plans for her life, which included an addition to her family.

Does anyone believe that this latest pregnancy (an addition to her family) was part of the big plans Keisha had for her life? Sorry, I'm not buying it and her friend should know how stupid this statement is.
Her big plan should have been to go on birth control, get rid of the abusive man in her life, bring her 9 month old back into her home and raise the baby herself. Reading this nonsense is exhausting.
_________________
I've never been willing to sacrifice functionality for beauty ~ My Father

The 23-year-old allegedly told a witness, "I'm doing to her what she did to me," before stabbing ex-girlfriend Keisha Lewis and taking their 9-month-old baby.

According to prosecutors, Pierce County Sheriff’s Deputies responded to a duplex in the 6000 block of 57th Avenue West in the early evening Monday.

They followed a trail of blood into the home and found Lewis lying face down in a large pool of blood. Medics rendered aid but Lewis was pronounced dead at the scene. An autopsy performed showed that Lewis had been stabbed multiple times, including in the head and throat.

A witness told investigators that as Lester’s car drove past him he heard the driver say, “I’m doing to her what she did to me.”

That was an apparent reference to a prior incident in which Lewis allegedly stabbed Lester during a fight, according to prosecutors. Additional witnesses observed Lester and Lewis talking outside the residence just before the stabbing.

“He’s killing me,” the witnesses said Lewis screamed as she ran bleeding into the home. The couple’s nine-month-old was in the car with Lester during the incident.

An Amber Alert was issued after Lester fled the scene with the couple’s child. As Patch first report, the alert was cancelled later in the evening when Lester arrived at Good Samaritan Hospital in Puyallup to turn himself into police. Lester, who had custody of the child, brought the child to the scene and left the scene with the child. The child was taken into protective custody.

“Ironically, this murder occurred on the last day of Domestic Violence Awareness Month,” Prosecutor Mark Lindquist said in a press release, “and it highlights the need for continuing efforts to reduce domestic violence through vigorous prosecution and prevention.”

Patch will have more on this story as information becomes available.

Man pleads not guilty in Halloween killing in University Place

Pierce County prosecutors on Wednesday filed a first-degree murder charge against the man accused of stabbing his pregnant girlfriend to death on Halloween.
Judge Gary Steiner entered a not-guilty plea on behalf of Joseph Andrew Lester during an arraignment in Superior Court. Steiner ordered Lester jailed in lieu of $2 million bail.
Lester, 23, said nothing during the brief court appearance. Prosecutors also filed a second-degree murder charge against him to give a future jury the option of convicting him of a lesser charge.
Deputy prosecutor Phil Sorensen said Wednesday he might amend the murder charge to include aggravating factors if he can prove Lester knew Lewis was pregnant or that the baby girl or a toddler inside the duplex witnessed the violence.
Those factors could increase Lester’s prison sentence if he’s convicted.
Lester will not be charged with kidnapping, Prosecutor Mark Lindquist said Tuesday.
Lester and Lewis had a volatile relationship, according to people who knew them and court records.
Michelle Wims, an ex-girlfriend of Lester’s, attended his arraignment Wednesday. She told reporters outside court Lewis was overly possessive of Lester.
“Honestly, I think he got to his breaking point,” Wims said. “She drove him crazy. He’s never been like this before.”
Lewis reportedly stabbed Lester during another argument earlier in October, court records show. Charges never were filed in that case.