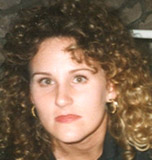 Circumstances of Disappearance
25 Dec 1996 Patty Vaughan was last seen between 18.30 – 21.00 by her estranged husband at their residence in Wilson County, Texas.
Patty and her husband began a trial separation in October 1996. He moved into an apartment in San Antonio, Texas and Patty remained at their residence on Oak Park Road in La Vernia, Texas with their three children. The couple had been married since 1985. Patty was dating a former boyfriend in December 1996 and the relationship apparently caused an argument between Patty and her estranged husband at her home on December 25, 1996.
She is believed to have driven off after an argument with her husband.
Her husband told authorities that Patty left the house alone on December 25 and simply vanished. He filed for divorce from his wife on December 26, one day after Patty was last seen. Other family members reported her as a missing person to authorities. On December 26th Patty’s blue Dodge Caravan was discovered abandoned with a flat tire, one day after she was last seen. The vehicle was located on Loop 1604 in South Bexar County, approximately 5 miles from Patty’s employer and 15 miles from her home. Tests revealed that the tire had been intentionally deflated.

Dec 29th 1996: Bexar County Sheriff's Office Criminal Investigation Division and other evidence technicians investigated Patty's residence. Using the chemical substance Luminol to find reaction with items contained in blood, the officers found very strong reactions in the bath area, wall adjacent to bedroom door, and bedroom floor. When the officers turned off the light, they observed what appeared to be shoe prints on the bathroom floor, leading to the closet. There were also various streak or swab-type markings on the bedroom floor, adjacent to the bathroom floor and leading into the bath and closet area.
The blood found in the van and in the house was DNA tested and confirmed to belong to Patty.

She has never been located and no arrests have been made in connection with her case.
Foul play is suspected in Patty’s disappearance due to the circumstances involved.

NOTE: No pictures were taken at the home at the time of the search or subsequent luminol tests showing blood evidence in the master bedroom of the home. The home was never sealed as a crime scene even after Patty's blood was found. Her children were never questioned even though they were home at the time Patty disappeared.

I don't understand why? And Patty family has not seen the children since Patty turned up missing. This reminds me of the Susan Powell case.

This is outrageous! So sad that nothing was done to get justice for Patty. Wonder how many children and what ages they were?...They should be old enough now to tell if they saw or heard anything that day...IF they were old enough to remember it now.

Found this with info on the children...They were 6, 8, and 9 when this happened in 1996. Plenty old enough to know and tell...Just wonder if they were and are aware of what happened, and why they would not come forward now, unless they have an extreme loyalty to their father, or were and still are deathly afraid of him. I wonder if any of Patty's family has tried to locate them. I mean, they would be adults now--25, 24, and 22...Surely someone could track them down and find out if they have any information to share....

LET THE FACTS SPEAK FOR THEMSELVES

Dec 1990: moved to and stayed in Adkins, Texas (Wilson County)

October 1996: began six month trial separation. Husband moved to an apartment in San Antonio. Patty stayed in the house with their three children.

27 Dec 1996: Patty's relatives notified Bexar County Sheriff's Office that her van had been found by the side of the road at Loop 1604 and FM 1937. Blood found under rear seat of van.

28 Dec 1996: Bexar County Sheriff's Office received an anonymous call indicating that the caller's friend who had been traveling down Loop 1604 on December 25, 1996 had seen a blue van on the same road pull over.

29 Dec 1996: Bexar County Sheriff's Office Criminal Investigation Division and other evidence technicians investigated Patty's residence. Using the chemical substance Luminol to find reaction with items contained in blood, the officers found very strong reactions in the bath area, wall adjacent to bedroom door, and bedroom floor. When the officers turned off the light, they observed what appeared to be shoe prints on the bathroom floor, leading to the closet. There were also various streak or swab-type markings on the bedroom floor, adjacent to the bathroom floor and leading into the bath and closet area.

The blood found in the van and in the house was DNA tested and confirmed to belong to Patty.

The case is still open. Mystery is still unsolved.

On Christmas Day 1996, Vaughn had a fight with her husband, JR, and called some of her family members distraught and crying. The next day, her blue minivan showed up, but no Patty.

Bexar County investigators showed KSAT-12 pictures that hadn't been seen by the public—a picture of Patty's home, her blue minivan and the inside of her living room.

Officials said they held on to the photos for years and are ready to discuss the case further.

"We have good, solid information, where we just didn't have that information before," Louis Antu with the Bexar County Sheriff's Office said.

For years investigators tried to rule out Patty's husband as a suspect, but simply couldn't.

"Every place that he claims to be, we just can't confirm that he's there, and we'd love to," Antu said. "We really want to rule him out so we can go sifting elsewhere if we need to."

Antu said any new information and review of old evidence always leads them back to their "primary suspect."

Authorities said blood found in the home and in the van is indeed Patty's; however without her body, it's a tough case to prove.

JR Vaughn is currently living in Boise, Idaho. Officials said all other suspects in the case have been ruled out.

Authorities are still looking for witnesses or anyone who has information on the case to come forward.

SAN ANTONIO -
Christmas is time for joy and happiness for many people but for the family of Patty Vaughn it's a day that brings back nothing but pain and heartache. This Christmas will mark 15 years since Vaughn disappeared.

"One of the last videos I saw of her was her singing a Christmas song and she had a beautiful voice," Jeannie Iiams said recalling her older sister's love of the holidays.

Iiams' said her older sister Patty loved Christmas. Even when money was tight she made sure everyone got something. One year she made an ornament for her little sister that still goes on her tree ever year.

The last time anyone saw Patty was on Christmas day 1996. While her body has never been found and no one's been charged, Iiams believes Patty's husband JR Vaughn killed her.

Iiam's mother Patsy Wallace is also convinced she knows who killed Patty. "With all my heart and soul I know that JR Vaughn killed my daughter," Wallace said.

Even though investigators have now officially confirmed they found Patty's blood in the home and her van as well as other circumstantial evidence linking JR to the disappearance, he's never been charged.

Over the years, investigators have conducted digs that turned up nothing. Patsy Wallace said that's because they're looking in the wrong place.

She thinks the body is in the backyard of the home Patty shared with JR Vaughn, possibly under a wood pile.

"I know that Patty is 50 feet from the road in a pit and covered up," Wallace said.
The family said other than a brief, surface search of the property back in 1997, investigators haven't searched the property and Iiams said the current home owners refuse to cooperate.

"They aren't cooperative. They said, 'Your sister is not here, get off my property,'" Iiams said.

The family continues to hold out hope investigators will eventually come to the same conclusions they have. Meanwhile, they're left clinging to the hope that Vaughn might confess someday.

"I think that his conscience is going to get to him and he will confess and tell us where Patty is," Wallace said.

Bexar County cold case investigators said despite their best efforts to rule Vaughn out as a suspect, the evidence keeps pointing to him.

Investigators said they have a strong circumstantial case against Vaughn, but without the body it's a tough case to sell to prosecutors.

New DNA findings in the 1996 Christmas Day disappearance of Patty Vaughan are being reported by the Bexar County Sheriff’s Office, pointing to an unknown female in the victim’s van.

“I was very surprised, didn’t expect that at all,” said Deputy Adrian Ramirez with the BCSO cold case homicide unit.

Ramirez said Vaughn’s ex-husband, J.R. Vaughn, remains a person of interest, given he was the last one to see her alive, and the estranged couple had argued that evening at their Wilson County home.

Ramirez said undisclosed items found in the van had been tested before, but the latest DNA science pointed to a female not related to the victim.

He said it was someone “who could have assisted with her disappearance and was in the van at one time.”

However, Vaughn’s body has yet to be found, although at one point it was believed to have been encased in a concrete foundation.

Ramirez said the latest findings bolster what was first thought.

“We’ve always felt that there was somebody else involved,” Ramirez said, given the distance from her home to where her van was abandoned.

Ramirez said, “Someone will have to explain why their DNA is in that vehicle.”

Based on other information, Ramirez said he thinks he knows who that female someone is, but to obtain their DNA as further proof, he needs probable cause.

He said that is why he hopes to hear from “somebody who saw something, someone who definitely knows that the people are involved.”

From above:
"I know that Patty is 50 feet from the road in a pit and covered up," Wallace said.
The family said other than a brief, surface search of the property back in 1997, investigators haven't searched the property and Iiams said the current home owners refuse to cooperate.

"They aren't cooperative. They said, 'Your sister is not here, get off my property,'" Iiams said.

I wonder who these people are that live in that house now and why they will not allow LE to search that property? Relatives/friends of the husband maybe? Seems like if they don't have anything to hide they wouldn't mind the place being searched. Highly suspicious. Can't LE get a search warrant?
I am positive I've seen this case featured on one of the I.D. channels quite a while back.

SAN ANTONIO -
Monday brought new activity in the ongoing search for Patty Vaughn, who was last seen in 1996.

Several law enforcement agencies were back out at her former husband's property on Monday.

Investigators with the Bexar County Sheriff's Office and the FBI said that they were asked to be there by Wilson County sheriff's officials and the Texas Rangers, but just as observers.

Vaughn's husband, JR Vaughn, has been a person of interest in her disappearance.

There have been searches on properties all over South Texas over the years and several different agencies have investigated her disappearance.