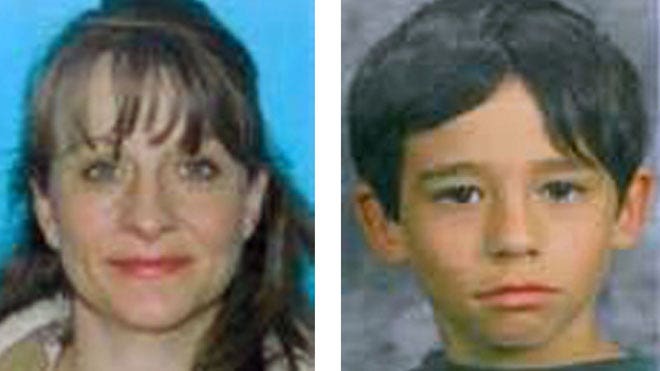 OMAHA, Neb. – Police say a Nebraska mom who disappeared last month with her son strangled the 10-year-old boy before strangling herself in the woods of an Iowa state park.
Council Bluffs police said Monday that Charlotte Schilling, 41, of Plattsmouth, Neb. and her son, Owen, both died with plastic zip ties around their necks in a murder-suicide.
The Schillings were missing from May 10 until their bodies were found May 20 in Lake Manawa State Park, south of Council Bluffs in western Iowa, about 20 miles north of Plattsmouth.
Council Bluffs police say Charlotte Schilling tried to commit suicide with a plastic zip tie in November, but a family member intervened then. Once a zip tie is tightened, the only way to loosen it is to cut it off, so police said after Schilling tightened one around her own neck enough to restrict breathing it would have been difficult for her to remove it.
Council Bluffs Police Sgt. Chad Meyers said Schilling actually lost consciousness during her previous suicide attempt, and a family member heard her fall. Someone was able to cut the zip tie off Schilling's neck quickly enough for her to recover.
Investigators said friends described behavior in the days before Schilling disappeared with her son that's consistent with someone contemplating suicide. For instance, Meyers said Schilling gave away some of her personal belongings.
"Individually, each one of these people probably wouldn't have known anything was different," he said. "When you put it all together and look at it, it paints a pretty clear picture of someone who is contemplating suicide."
Relatives have said it wasn't unusual for Schilling to surprise her children with short road trips to parks, zoos and other nearby attractions. But the woman always called home and past excursions never lasted long.
Her family grew worried when neither she nor Owen returned home, and Schilling's cellphone went unanswered.
Investigators believe the bodies of Charlotte and Owen Schilling had likely been lying in the woods near Lake Manawa since May 10 when Schilling checked Owen out of Wade Robin Elementary School in Bellevue, Neb. But police cannot determine the exact date of their death.
Police found Schilling's vehicle at the park where the mother and son's bodies were later found. Schilling's cellphone and wallet were in her car, about a half-mile from where the bodies were found. Authorities had to rely on autopsy results to confirm the identities because of decomposition.
Schilling and her son were last seen in surveillance video from a convenience store near the park. The video showed Owen hugging his mom, and Schilling kissing her son on the head, and the clerk said nothing seemed unusual in the store.
Meyers said some of the items that were purchased at the convenience store were found partially consumed near the bodies in the woods. There was no sign of a struggle.

The poor boy looks so sad in that picture. How could a mother do such a terrible thing to her own child?

The amount of emotional pain this woman was in is so sad. I would imagine she did not want to leave a young Son behind to deal with his Mothers suicide?