In a frantic 911 call on March 1, Michelle Gibson tearfully told police about a grisly discovery she made at 2 a.m. in the family's Peoria, Ariz., home.

"There's blood everywhere!" Gibson cried. "I'm with my kids and I just got home and my husband's out in the garage dead!"

After a month-long investigation, detectives now say it was all a sinister act. Authorities allege that Steven Gibson, 39, the owner of a machine shop, was the target of a family murder plot hatched by his wife and their son Steven Jr., 15, who took part in stabbing him.

"This is a complete shock to the rest of the family," Amber McGonagill, 23, Steven Gibson's stepdaughter, tells PEOPLE. "I have no clue why my mom would do this. My dad was a loving man and was not abusive in any way."

Michelle Gibson, 41, a nursing school student, allegedly offered $1,000 each to two of her son's friends on Feb. 28, telling them "they needed to kill [her husband] before he killed her or [his son]," according to court documents filed by prosecutors.

The plan was to use chloroform to knock Steven Gibson out, drive him to a nearby park, shoot him in the head, and make it look like a drug deal gone bad, the documents say.

The mom also allegedly told the two boys that they needed to make sure her husband's body was found "so a money inheritance could be paid out."

Later that evening, one of the two boys, Erik McBee, 16, who worked at Popeye's Chicken, allegedly beat a sleeping Steven Gibson in the head with a baseball bat, according to the prosecutors' complaint.

Steven Jr. then later "drove [a] large knife he was holding into his father's chest at least three times," the documents say. "[McBee] then took the knife and slit the victim's throat."

Michelle Gibson claims she was out shopping with her kids at the time, but her 16-year-old daughter Alysa told police that after the three of them drove to a store, Steven Jr. was driven back to the house by his mom after he received a phone call.

Later, after they picked him up in a church parking lot, he allegedly stated: "What's done is done," prosecutors allege.

The scheme fell apart when McBee, who was helping Steven Jr. move the body, heard police sirens in the distance, fled the scene but later turned himself in to police at the house, documents say.

Michelle Gibson, Steven Jr. and McBee have each been charged with first-degree murder and remain in police custody. Attempts to reach their attorneys were unsuccessful.

Police have not yet offered a possible motive. The Gibson household has a record of domestic violence calls between the parents, but they consistently refused to press charges, Peoria Police Department spokeswoman Amanda Jacinto tells PEOPLE.

The elder Steven Gibson had been arrested in Nov. 2012 for allegedly assaulting an officer during a DUI stop, but none of the family members had any other significant criminal history.

Asked if the Gibsons' 16-year-old daughter would be implicated in the plot, Jacinto added, "More arrests could occur depending on how the investigation plays out. This is a complex case and there's still a lot of evidence to review."
[You must be registered and logged in to see this link.] 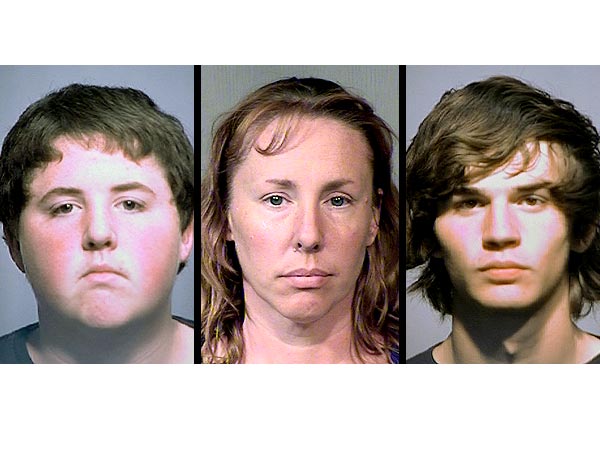 PEORIA, Ariz. -- Police have arrested the wife and teenage son of a Peoria man found dead in his garage on March 1.

Michelle Dawn Gibson, 41, was arrested Thursday and booked into the Fourth Avenue Jail on one count each of conspiring to commit murder in the first degree, conspiracy and hindering prosecution in the first degree. She is being held without bond.

Michelle Gibson called police at around 2 a.m. on March 1 and said her husband was dead and lying in the garage. She said there was blood everywhere and she did not know what happened.

Police previously arrested Erik McBee, 16, in the beating and stabbing death of Steven Gibson Sr., 39. He was charged as an adult for first-degree murder and conspiracy.

McBee claimed that he went upstairs and was confronted by Gibson, who shoved him and punched him in the face. McBee told police that he hit Gibson with an aluminum baseball bat then stabbed him with a knife.

After an extensive investigation, Peoria police say McBee did not act alone in the murder as he originally stated. Police allege that Gibson's wife and son planned the murder at least one week prior to it occurring.

According to court documents, on the day of the murder, McBee, Gibson Jr., a 16-year-old male friend and a 14-year-old female friend were at the family's home near 75th Avenue and Thunderbird Road where they had a discussion with Michelle Gibson about killing her husband.

She allegedly told them they needed to kill him before he killed her or her son. She reportedly handed the male friend a handgun and told him to use it to kill her husband. Court records state that Gibson offered McBee and the friend $2,000 cash to split between them once her husband was dead.

The male friend's mother picked him up from the house and he did not mention the murder plot to her. He did not return to the house.

According to court records, the plan was to kill Gibson on the night of March 1, but the plan changed when Michelle and Steven got into an argument the night before. McBee was spending the night in the family's home when the argument occurred and the couple's son reportedly told him they had to do it that night.

Michelle Gibson and her 17-year-old daughter left the house to go shopping at several stores and while they were gone, McBee allegedly hit Steven Gibson Sr. with a baseball bat three times while he was asleep in bed.

Court records say that Gibson Jr. was in the house when the murder started but then ran out to an unknown location.

McBee walked back upstairs to check on Gibson's condition and found him in the bathroom holding a sock to his head. McBee then allegedly beat him with the bat until he was down on the bathroom floor.

A phone call was placed to Gibson Jr. and he reportedly returned with a knife. According to court records, he drove the large knife into his father's chest at least three times then McBee took the knife and slit the man's throat.

McBee, Gibson Jr. and the 14-year-old female friend then worked together to drag the body downstairs and into the garage, the documents said.
Peoria police said the plan was to load Gibson's body into a truck and take him to a nearby park where it would look like he was killed for drugs.

However, when they heard sirens, McBee and the girl fled on foot, leaving behind their cellphones backpacks and shoes.

Michelle Gibson told police that her son was with her the entire time she and her daughter were shopping, but cellphone records do not support that claim and Gibson Jr. is not shown in all of the video surveillance images.

According to the court documents, there were previous domestic violence incidents involving the couple.

The investigation is ongoing.
[You must be registered and logged in to see this link.]

A Peoria mother and her teenage son pleaded not guilty this morning to murder charges, about six weeks after police said the two hired a 16-year-old boy to kill a member of their family.

Police said at the time that Michelle Gibson called 911 early on March 1 saying she found her husband dead in the garage. According to police, while investigators were at the house, 16-year-old Erik McBee walked up to the murder scene with a 14-year-old girl and told police he did it.

McBee was charged with first-degree murder and the 14-year-old was questioned and released. A few weeks later, police released the details of a bizarre murder plot.

Police discovered that Steve Gibson's wife, Michelle, and their son, Steven Gibson Jr., told McBee and another 16-year-old boy that Steve Gibson was a danger to them and that they should help protect their friend -- by killing him, for which they would collect $1,000.

The other 16-year-old boy backed out that night because his parents called him and told him to come home, but McBee stayed.

According to police, Michelle Gibson and her son went out, while McBee went to Steve Gibson's bedroom and hit him multiple times with a baseball bat. He left the scene, then came back to find Gibson still alive, so he hit him several more times with the bat and cut his throat with a knife, police say.

Steve Jr. was then dropped off at the house by his mother, and he allegedly stabbed his father a few times, too, police say.

Gibson's body was then placed in the garage, as they planned to transport his body to a park, where it apparently would look as though he got killed for drugs, police say.

McBee got spooked, though, and ran off, so the Gibsons ended up staging the body in the garage, before Michelle Gibson called police saying she'd just found her husband's body.

The Gibsons and McBee all have pleaded not guilty to charges, and police said two weeks ago that there were three other people who were either involved or knew about the plot, but they haven't been arrested.
[You must be registered and logged in to see this link.]

Unbelievable!!!! Talk about a dysfunctional family!