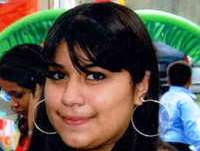 The State of Texas issued the Amber Alert late Monday night (11-23) after the girl was reportedly abducted in Shepherd. Shepherd is north of Houston. The girl is considered to be in grave or immediate danger.

The suspect is Joaquin Garcia, an 18 year old Hispanic male, 6' weighing 175 pounds with black hair and brown eyes. He has spiky hair and acne all over face. He was las seen wearing a brown shirt with an eagle on the front, blue jeans and white tennis shoes.

The suspect vehicle is a blue-green 1999 Chevy Malibu 4-door with Texas license LHF-502.

I have searched the web and there is hardly anything on this poor girl.