Juan Rivera was found guilty of rape and murder for a third time Friday despite new DNA evidence that he claimed was proof of his innocence.

The verdict seemed to stun his attorneys and family members, who believed science would be Rivera's long-sought deliverance.

As they have from the start, though, prosecutors based their case on Rivera's confession that he killed Holly Staker, 11, while she was baby-sitting in Waukegan in 1992. Despite a withering defense attack on the statement's credibility, it once again appeared persuasive enough to convince the jury.

But Rivera's lawyers vowed to appeal, meaning the long-running and sensational Lake County crime drama may yet see another act.

"We are convinced of his innocence and will continue to work," said defense attorney Thomas Sullivan.

Rivera, 36, was able to force another trial after advanced DNA testing revealed in 2005 that semen found in the girl's body could not have come from him. His lawyers said that meant someone else must have killed her. Prosecutors downplayed that evidence, however, suggesting the girl might have had sex with someone else before she met Rivera or that the sample had been contaminated.

They focused on Rivera's confession, which has been the subject of fierce controversy since his first trial in 1993.

Rivera was in custody on a burglary charge when he became a suspect in Holly Staker's murder. Another inmate told authorities that Rivera said he had information about the case.

Detectives questioned him over four days before he signed two confessions, saying Holly (right) had invited him into the home where she was baby-sitting and had sex with him.

When she mocked his performance, according to the statements, he stabbed her to death.

His lawyers have consistently argued that the confessions used words that were beyond the vocabulary of a defendant with an IQ of 79. They have also suggested that police hinted at the details they wanted to hear as they relentlessly questioned Rivera.

This time, the defense questioned why authorities did not retain the notes they used when writing the confessions signed by Rivera, and why the statements were not taped. That was not required then, but a series of high-profile false confessions later led Illinois to adopt rules mandating the recording of interrogations in murder cases.

Rivera's case had one element in common with some of those false confessions: DNA evidence that pointed elsewhere.

That had given Rivera's family hope that this time the jury would find him innocent. But the 12 jurors' decision appeared difficult, and on Thursday, after three days of deliberations, they told Judge Christopher Starck they were deadlocked. He told them to come back Friday.

Their deliberations appeared rockier still Friday afternoon, when one juror sent out a note telling the judge, "I'm concerned about being impartial."

The note, read in court, indicated that the juror's work experience led him or her to put far more stock in scientific evidence than human testimony. But after about 2 1/2 hours, as the judge and attorneys hashed out what to do, the juror sent out a second message.

"I no longer need a response to my inquiry," it said. "I have reconciled my differences."

About 4:30 p.m., the jurors were led into the courtroom. Their not-guilty verdict on the first count -- a non-felony charge of murder -- caused Rivera's family to gasp.

But the family quickly fell silent when the verdict turned to guilty on the two felony charges of murder and rape. One of Rivera's attorneys held his head in his hands.

"I just don't understand how you can find him guilty when the science is irrefutable," the defendant's wife, Melissa Sanders-Rivera, said outside the courtroom.

Prosecutors declined to comment after the verdict. Jurors were escorted out of the courthouse and did not talk to the media.

Later, Rivera's family gathered at the Waukegan apartment of his parents. His mother sobbed and one of his lawyers cried too. The entire gathering appeared baffled by the verdict they had felt confident would go their way.

"I thought this was going to be justice here," said Miguel Diaz, Rivera's brother. "My question to jurors would be, 'You had a hung jury. What happened?' " 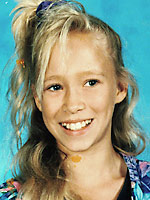 I will never believe an 11 year old girl invited a grown man in to have sex and Laughed at him...she would not even know he was no good in that way..... what was the DNA evidence LM?? you know???

Passions ran high in the courtroom, but Juan Rivera remained stoic Thursday as he was sentenced to life in prison without parole for the third time in the rape and murder of 11-year-old Holly Staker. Rivera did not testify at the trial, but instead tries to sway public opinion through gullible reporters afterwards. He confessed. Other DNA means means that he did not act alone. Or else that the scientists--yes, they DO make mistakes--made a hash of the DNA storage, handling, testing samples. If I were wrongly charged with murder, I could not wait to trumpet my innocence to a jury,would relish cross examination. Guilty as charged.
http://www.topix.com/forum/city/waukegan-il/TU1UJKAA7E8C16LJP

Here is more for you critter.

Rivera, 36, was able to force another trial after advanced DNA testing revealed in 2005 that semen found in the girl's body could not have come from him. His lawyers said that meant someone else must have killed her.

Prosecutors downplayed that evidence, however, suggesting the girl might have had sex with someone else before she met Rivera or that the sample had been contaminated.

[You must be registered and logged in to see this image.]
An appellate court decision reversing Juan Rivera’s conviction for the 1992 rape and murder of 11-year-old Holly Staker doesn’t mean Rivera’s release from prison is imminent.

That decision rests largely with Lake County State’s Attorney Michael Waller, who has not yet indicated whether he will request a rehearing before the 2nd District Appellate Court in Elgin or appeal the decision to the Illinois Supreme Court. Waller has indicated it could be next week before he makes a decision.

Until then, Rivera and his family wait.

“We have no idea what his attitude is,” said Rob Warden, executive director of Northwestern University’s Center on Wrongful Convictions, whose attorneys represent Rivera, 39.

Waller has up to 35 days to make his decision before Rivera would be released automatically, Warden said, adding that he hopes Waller “will do the right thing ... and drop (the charges).”

Police found Staker’s body in August 1992 in the Waukegan apartment where she baby-sat. She had been sexually assaulted, strangled and stabbed 27 times. In October 1992, investigators, working on a tip that Rivera might know something about the crime, interviewed the then 19-year-old who at the time was in prison for violating his probation on a burglary conviction. Rivera reportedly gave conflicting accounts about his whereabouts at the time of the murder over several days of interrogation.

Although no physical evidence linked him to the crime, he was convicted in 1993. The appellate court reversed the conviction and ordered a new trial. Rivera was convicted again in 1998. The appellate court upheld that conviction but in 2004, defense attorney Jeffrey Urdangen from the Center on Wrongful Convictions secured a new trial based on DNA analysis that excluded Rivera as the source of semen collected from the 11-year-old. Rivera’s 2009 trial ended with a third conviction and a life sentence.

On Friday, the appellate court found that prosecutors’ evidence was “insufficient to establish guilty beyond a reasonable doubt” and reversed the conviction, leaving several possible scenarios.

If Waller decides not to appeal, Rivera would be released, Warden said.

“If this opinion stands he cannot be retried,” Warden said.

Assuming it does, Rivera can petition the court for a certificate of innocence, said Warden, or he could also petition the Illinois Prisoner Review Board to request Gov. Pat Quinn issue a pardon based on innocence.

“We’ve had clients who’ve been exonerated in both manners,” Warden said.

An Illinois inmate sentenced to life in prison after being tried three times for the 1992 rape and murder of an 11-year-old girl was freed Friday when prosecutors said they wouldn't challenge a court ruling throwing out his conviction.

Juan Rivera, 39, was embraced by supporters and surrounded by media cameras as he walked out of Stateville Correctional Center in Joliet. He served more than 19 years in prison.

Rivera told the crowd he isn't angry, has no bitterness and wants to go to school and get an education.

"I just thank God that this ordeal is over," Rivera said. "All I want to do is spend time with my family. This is the first day of the rest of my life. I just have to live life day by day, study and move forward."

Prosecutors said earlier Friday they would not challenge an appellate court ruling throwing out Rivera's conviction in the death of Holly Staker. Staker was found stabbed 27 times and raped in a Waukegan apartment on Aug. 17, 1992 while babysitting a 5-year-old boy and a 2-year-old girl. Investigators never found a DNA match for semen found in the victim.

Lake County State's Attorney Michael Waller said in a statement he made his decision after reviewing the appellate court's opinion and considering all the evidence.

"As a result of that examination, I have decided that I will not ask the Illinois Supreme Court to review the appellate court's decision reversing Mr. Rivera's guilty verdict," Waller said in the statement. "Therefore, the prosecution of Mr. Rivera comes to a conclusion today."

Rivera was in custody on a burglary charge when he became a suspect. Rivera confessed after questioning by detectives of the Lake County Major Crimes Task Force.

Northwestern University's Center on Wrongful Convictions represents Rivera. His attorneys filed a motion in response seeking his immediate release after prosecutors made their filing.

I hope the State of Illinois has to pay him for his time behind bars. That is a law in Florida if a conviction is overturned and it should be a law in every state.
_________________
Prayers for our little HaLeigh Cummings, wherever she may be!!

I cannot image nineteen years of one's life in prison for something they didn't do. Thank God for DNA.