The search is on for two little sisters who investigators say were swiped by their own mother Monday afternoon.

Isabel Martinez, 3, and Caydence Gonzales, 2, were last seen Monday afternoon and now the search is on for both of them, as well as their mother.

Their aunt's home is the last place the sisters were seen. They're believed to be with their mother, but authorities believe they're in danger.
Michelle Gonzales' playroom is disturbingly empty Tuesday night.
"They'd come and watch movies. They loved to play tea time," said Gonzales.
Her two little nieces who are usually scurrying about are missing and are now the subject of an Amber Alert.
"I feel betrayed, very betrayed," said Gonzales.
She says she was babysitting Isabel and Caydence on Monday like she does every day. Their mother, Mecinna Dufore, who does not have custody, stopped by to visit. Gonzales left the room for just a minute.
"And when I came out they were gone," said Gonzales.
No one has seen them since.
"I would hope that she would not hurt them," Gonzales said.
Dufore, 28, is currently on probation for drug possession. Her children have lived with Gonzales' mother for two years.
"We're their security. We're their home. We're all they know," said Gonzales.
Without knowing where the girls are, she fears the worst.
"I don't know what she's capable of," Gonzales said.
Caydence Gonzales has curly, brown hair and brown eyes, weighs approximately 25 pounds and is two feet tall. She was last seen wearing a pink striped shirt with blue jeans.
Isabel Martinez has brown hair and brown eyes, weighs approximately 35 pounds and is three feet tall. She was last seen wearing a brown sweatshirt with a princess crown on it and blue jeans.

Dufore is 5 feet 5 inches tall, weighs approximately 150 pounds and has brown hair and hazel eyes. She reportedly has a history of drug abuse and some suicidal thoughts.

DPS told us that Dufore's parental rights had been terminated for some time. The Harris County Sheriff's Office wants to hear from you if you've seen any of them. You are asked to call 713-755-7427.http://abclocal.go.com/ktrk/story?section=news/local&id=7240760 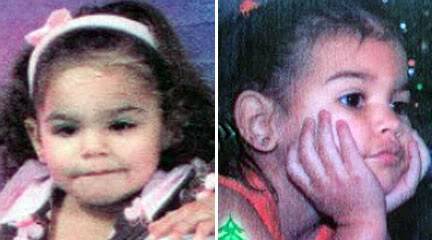 Two young sisters who were taken from a north Houston home and were the subject of an Amber Alert have been found safe in Ohio, officials said Thursday night.
An Amber Alert was issued on Tuesday for sisters Caydence Gonzales, 2, and Isabel Martinez, 3, who were taken Monday afternoon from a home by their mother, whose parental rights have been terminated by the courts.
FBI agents found the girls in Ironton, Ohio, about 70 miles southeast of Cincinnati. Their mother, Mecinna Marie Dufore, 28, was arrested.