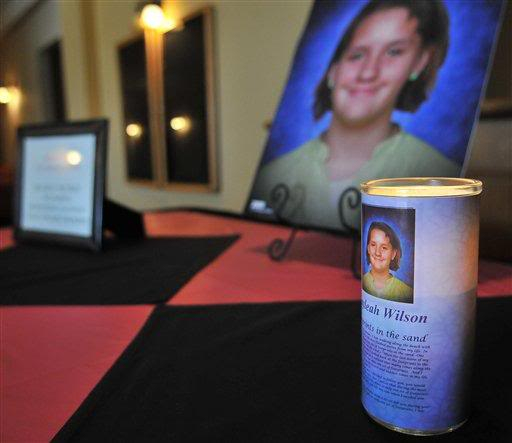 A candle burns at the memorial service for 12-year-old Kayleah Wilson on Tuesday May 25, 2010 at the Plaza Hotel and Convention Center in Greeley, Colo.
A 12-year-old girl missing for seven weeks before she was found dead near her home was remembered as a girl who loved to laugh and dreamed of becoming a veterinarian and visiting Ireland.

Tuesday’s memorial for Kayleah Wilson drew about 400 mourners. The girl’s mother, April Wilson, thanked neighbors and complete strangers who came to Greeley to help search after Kayleah vanished March 28 on her way to a friend’s birthday party.

April Wilson fought tears and said Kayleah “will be missed and loved.”

Kayleah was also remembered as a girl who enjoyed plants and flowers, jewelry making, drawing and making bath salts with her mother. She also enjoyed Celtic music and had a favorite band, Celtic Thunder, that inspired her to someday visit Ireland. She also was slightly deaf and knew some sign language, including the symbol for love, which Kayleah would sometimes flash at her mother, said Journey Christian Church Pastor Arron Chambers.

He also shared a poem that Kayleah wrote and framed for her mother in which she describes a little girl with no food. Kayleah wrote that when she asked God what he was going to do about it, the answer was “I made you.”

“Kayleah believed that God made her to help people and to bring hope to their lives,” Chambers said, adding that hope is what fueled the community to spend hours, days and weeks searching for Kayleah.

“She was more than the cute girl you see on TV and the flyers on the street,” he said.

Chambers also tried to reassure mourners that Kayleah’s killer would be found. “The person who took her life will face justice. We’re all hoping it happens soon,” he said. But Chambers also pointed to a button that Kayleah wore on her favorite hat with the saying: “No place for hate.”

Kayleah was a sixth-grader at Brentwood Middle School a few blocks from her home. Several of her schoolmates attended the service.

“When she came up to me at school she told me how excited she was that it was almost summer,” said Cheyenne Parmer, 14.

Pink, silver and black balloons framed a projection screen where mourners saw pictures of Kayleah at various events — the beach, a birthday party, a Christmas from some years ago, and also pictures that have become familiar in the past weeks — her school picture that was used on a missing person flyer and another where she’s wearing oven mitts.

I am praying for justice.