25 years ago, Jeremy Bright seemingly vanished from the streets of Myrtle Point. On August 14th, his family and friends gathered to mark the anniversary of his disappearance and to call for answers.


Described as an "all-American boy," the 14 year old was working that summer, helping his family open a restaurant. But, he also had time to play some ball with friends and take his younger sister to the Coos County Fair.

On August 14, 1986, that is where he was headed, to meet his sister, S'Te, by the Ferris Wheel. Only, he never arrived. And he has never been seen since.

What exactly happened to Jeremy Bright that day remains an unsolved mystery. That is something his family would like to see changed.

They say the 25 years he has been missing have not eased their pain, or lessened their desire to find him.

So, on the anniversary date of his disappearance, friends and family gathered at the Myrtle Crest baseball field where Jeremy played ball for an undefeated team one year.

His sister, five years younger than Jeremy, remembers that year well. "Jeremy was never one to leave me out. He could be ornery and he could be stubborn, but he always was sure to include me in what he did. I remember climbing into the back of the pick-up truck with all the other baseball players, and Jeremy, and heading down to the A&W for ice cream, after those winning baseball games."

Hundreds of balloons were also released to mark the occasion.

Including some 800 green balloons, in honor of the hundreds of thousands of missing and exploited children in this country each year.

But, for S'Te and her mother Diane, the one balloon labeled "hope" may have been the most important, because they have not given up their search. Their hope is that those who know what happened to young Jeremy Bright all those years ago will somehow find the courage to finally come forward and give them the answers that they need. 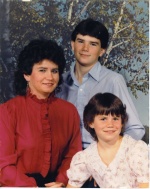