Book about Susan Cox Powell to be released

Book about Susan Cox Powell to be released

WEST VALLEY CITY — A book that delves into the mysterious disappearance of Susan Cox Powell will be released next week.
True-crime author Ann Rule’s book “Fatal Friends, Deadly Neighbors” includes the story of Susan’s disappearance and the deaths of her children, Charlie and Braden, at the hands of her husband, Josh Powell. The book is scheduled to be released on Nov. 27.
The Susan Cox Powell Foundation said in a recent website post that the story was told with the help of Chuck and Judy Cox.
“This will be the most complete coverage of a case that will never be over until Susan is found,” the website said. “Ann says that this is one of the most difficult stories she has ever had to tell, but she never wants anyone to forget Susan, Brandon and Charlie.”
[You must be registered and logged in to see this link.]

Ann Rule Book to be released

Ann Rule’s book, “Fatal Friends, Deadly Neighbors” which includes the tragic story of Susan Cox Powell and her sons, Braden and Charlie, will be on store shelves on November 27, 2012. With the help of Chuck and Judy Cox, this will be the most complete coverage of the case so far, a case that will never be over until Susan is found. Ann says that this is one of the most difficult stories she has ever had to tell, but she never wants anyone to forget Susan, Braden and Charlie.
The Coxes will join Ann in signing books at two Fred Meyer stores. On Friday, December 7, we will be signing at the Burien Fred Meyer store from 3 to 5 (or longer if need be.) On Saturday, December 8, we will start signing book copies from 2 until 4–or later at the Fred Meyer store at 17404 Meridian East Puyallup, WA 98373. More signings will be scheduled and will be noted here and on [You must be registered and logged in to see this link.] . There are eight other cases, (all but one from the Northwest), in this original “Pocket Books” paperback edition. Copies of Fatal Friends, Deadly Neighbors are also available in hardcover from book clubs.
We appreciate Ann Rule for telling this story, we hope that those who read this book will evaluate their own situations and resolve to do everything in their power to stop domestic violence, including taking any necessary steps for their own safety before they end up part of yet another domestic violence tragedy. 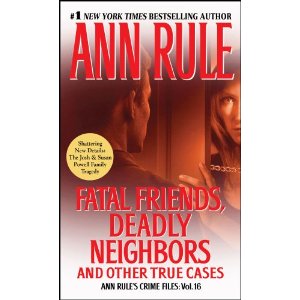 :thanks: Raine - I have reserved it at the library

Ann Rule is such a fabulous writer and this is one book I plan on reading.

Susan Cox Powell went missing on Dec. 6, 2009, and her disappearance made news around the world as her husband Josh and father-in-law Steven told the media she had run off with another man. But in her latest book “Fatal Friends and Deadly Neighbors” best-selling author Ann Rule talks about this bizarre story and details that have not been heard before about the night Susan went missing.

“Susan loved him so much when she married him. He was an older man– I think six years older. He had his own apartment, he had his own car. She didn’t realize that he lived with his father until a few weeks before she met him,” Rule said.

She looks through pictures taken from Josh’s home after the fire he started that killed him and their two sons. The burn marks around the edges tell a story, but image of the couple’s first Christmas together shows happier times.

“The difference between that Josh and who he became is just startling,” Rule said.

Josh was always socially akward, but Ann said he became more controlling and bizarre over time.

When she’s asked if she thinks Josh was a psychopath or sociopath Rule replied, “Not really, because sociopaths can be charming — people do like them. If they put on the right mask, people think they’re wonderful. Josh wasn’t wonderful with anyone.”

In her new book, Rule writes that his father Steven was even worse.

“I’ve written 33 books and a thousand or more articles and I don’t think I’ve ever found a more perverted man than Steven Powell,” she said. “He took photographs of her when she didn’t know. She’d be in the bathroom or changing clothes and he had a way to where he took pictures of her.”

Susan left her father-in-law behind when the couple moved to Utah. She hoped things would get better between them without Steven in the picture, but she was wrong.

Rule speculates on what she thinks happened to Susan.

“I think he [Josh] poisoned her on that Sunday night in December. One of her friends was over and for the first time ever he cooked supper and he made pancakes. He put one plate in front of Susan and that was hers. She was to eat that plate — he was insisting on that. Shortly thereafter, she threw up and went to lie down and her friend left,” Rule said.

“I think he took the boys and Susan’s body out into the West Valley where there are 5,000 or 6,000 abandoned mines and they’re so deep. I think she’s probably at the bottom of one of those mines.”

We don’t really know what happened to Susan Cox Powell, but Rule believes there is at least one person who knows more than he’s telling police.

“I think Steve quite probably went down to help Josh hide Susan more than she was hidden before because he took a furlough from work right after and drove to Salt Lake City.”

She’s hoping that information will somehow come out and that this tragedy serves as a warning to other women who find themselves in a dangerous situation.

“Somebody knows something. If nothing else, I would hope they would come forward and let the Cox’s know where Susan is. And then to women who find themselves getting boxed in and in a marriage like that, they have to save themselves.”

Rule is currently working on her next book about another local case. It should be published in the fall.

It was a moment of horror that shocked America.

Josh Powell, the suspect in his wife Susan’s disappearance, killed their two sons and then himself in a fiery explosion.

Now, Josh Powell’s sister, Jennifer, is speaking out about growing up with Josh in what she says was a house of evil.

They were raised in small towns in Utah and Washington, but there were problems in the family.

She says her father, Steven Powell, wanted to be a polygamist. And he watched pornography in front of her when she was a child.

Now, she has written a book about the case, A Light in Dark Places.

Susan Powell disappeared from her home in Utah in December 2009. Her body has never been found. Her husband, Josh, was the only suspect. Just-released interrogation tapes show he was uncooperative from the very start.

Authorities asked, “What do you want us to do? Just leave you alone and hope that she shows up?”

Josh said, “You guys are already trying to trap me on little things.”

Josh was never charged, but he lost custody of his children, Charlie, 7, and Braden, 5.

Susan's disappearance split the family, with Jennifer siding with Susan’s parents and other siblings defending their brother.

Jennifer reveals for the first time that she wore a wire and confronted her brother in an attempt to get him to confess.

Jennifer said, “I was really direct. Like, 'Where's her body. Just tell me where her body is. We want to have a funeral.'”

But the ruse failed.

She said, “He kind of played the stupid, 'My lawyer told me not to say anything.' But his emotions were just dull, non-existent. He just didn't react. It was really bizarre.”

During the investigation, her father was jailed on child pornography charges. His journal showed he was sexually obsessed with Susan and even wrote an eerie love song with lyrics like, “You let me touch you softly. Why is the question. And the effect amazes me!”

Jennifer said, “He had a humongous obsession for her so I guess it's not a huge surprise that he ended up writing weird music as well.”

She says the deaths of Susan and the boys released them from the house of evil that Josh created.

“No one can hurt them any more," said Jennifer.
[You must be registered and logged in to see this link.]

Has the book been released yet?

Slys, it has and below is a link. If you have a Kindle the download is $9 which is much less than buying the actual book. I think I will check out the library first to see how long the wait is to check it out.
[You must be registered and logged in to see this link.]