Haleigh Cummings' Father: I Stand Behind My Wife

Misty and Ronald Cummings Speak Out

Haleigh Cummings' Father: I Stand Behind My Wife

"My feelings are we need to find my daughter," Ronald Cummings said. "I don't think she has any information that will help find Haleigh."

Misty and Ronald Cummings say they hoped Tim Miller of Texas EquuSearch was going to help them find their missing daughter, Haleigh.

But, instead, they claim he took them out of town and tricked them the week of Aug. 20.

In a one-on-one interview, Misty and Ronald Cummings talked to WJXT-TV, an NBC affiliate in Jacksonville.

"He called on the phone and said I'm going to take you to Orlando to get you away because your days are numbered. and I said OK," Misty Cummings said.

But Miller said he only offered to take them away from the stresses in Putnam County.

"I asked if they wanted to get away for a couple of days ... let their heads clear out and stuff," said Miller, whose organization helps search for missing persons.

Haleigh has been missing since February, when she was 5 years old. The girl was in her Putnam County home with Misty Cummings, but disappeared at some point during the night.

Haleigh has not been found.

The Cummings said Miller told them not to bring their cell phones, and Misty Cummings said she was pressured to take voice analysis and polygraph tests.

But Miller said she begged him to take those tests and the hypnosis was her idea.

Ok that was way harder than it should it been. I moved this once to the interview thread already going. Moved the wrong post 2 or 3 times. Finally got it. trish54 posted this in interviews as a single post. I moved it because I thought it was the same interview posted this morning. Saw wrap post the same interview in the lounge. I got crazy trying to fix it. Please always post a new thread in the lounge and it will be get moved to its proper home at a later date. We are having a lot of duplicate post and I am as guilty as the next person of doing that. If you search the lounge and find it not already there please post it. The search option works well for me unless the post has already been moved. Wrap and I will get a system down soon I think of how long to leave them in the lounge.

Sorry, I didn't see that Trish had posted already. LOL. Oh well, it was a different article.

I like to leave anything in the Lounge for about a week or so..but if members are still posting on it after a week, I let it remain there.

This is the complete opposite of what Ron said in that interview. Ron is telling so many lies he can't keep them straight.

PUTNAM COUNTY, FL -- Misty Cummings has gone through multiple tests, trying to prove her innocence, but experts say she knows more about what happened to her missing stepdaughter than she is saying.

Misty Cummings was the last person to see Haleigh Cummings before she disappeared in February from their home. Misty's husband, Ronald Cummings, stands by her side.

He told First Coast News Monday "I don't think [Misty] has any information that will help find Haleigh."

Miller said Ronald Cummings told him, as well as Orlando-based attorney Mark NeJame, about two weeks ago that he doubted Misty's story about the night Haleigh disappeared.

Miller told First Coast News, "Ronald's statement right then was, 'The b**** has something to do with Haleigh's disappearance.'"

Misty Cummings has said she put Haleigh to bed that February night at 8:00 and then around 10:00 Misty herself went to sleep.

Miller said Ronald Cummings does not buy that story.

Miller told First Coast News, "He said, 'She had never been to sleep that night.' He said, 'The bed was still made.' He said, 'Nobody had been in the bed.'"

Miller said, NeJame asked Ronald Cummings, "Why did you marry her? [Ronald] said, his exact words were, 'You keep your friends close and your enemies closer.'"

NeJame told First Coast News he would not comment on private conversations, but he added, "Whatever Miller says, you can take it to the bank."

Misty Cummings said she had nothing to do with Haleigh's disappearance.

"They've been on me for six months. I've been the focus. They just need to move on and look for the right person," Misty Cummings said.

Jessica Clark asked Ronald Cummings, "Do you feel Misty is the key to this investigation?"

Ronald responded and said, "No, I don't. I think they're barking up the wrong tree."

Ronald Cummings' attorney, Terry Shoemaker said Ronald did have conversations with Miller. Shoemaker said Cummings has questioned everyone around him since Haleigh disappeared.

Shoemaker added that his client still stands by Misty and will continue to do so until there are "cold hard facts" to suggest he should not.

Misty Cummings and her attorney feel she passed the tests, even though the people who administered the tests said she failed them. 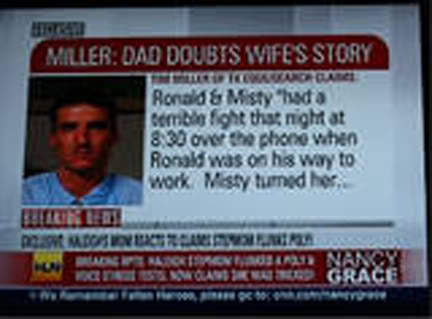 The condensed version of what Ron's been saying!
"I stand behind my wife, because the Bitch knows something about what happened and I'm keeping my enemy close.":fight: