Haleigh Cummings – Another One Throws Themselves Under The Bus

Haleigh Cummings – Another One Throws Themselves Under The Bus

Haleigh Cummings – Another One Throws Themselves Under The Bus
Posted on October 5th, 2009
by Simon Barrett in crime

When it comes to the families associated with Haleigh Cummings the word dysfunctional keeps cropping up. The Croslin’s, the Cummings, and the Sheffield’s all seem to have a unique talent for finding trouble to get into. I received this story from William ‘Cobra’ Staubs, it is too good not to share with you - Simon

During the BNN radio show on Sunday, the panel was asked if the Sheffield’s had been seen of or heard from.. I had not spoken to my client Ruby, mother in law of Johnny aka Marty Sheffield since July. TJ Hart of WSKY 97.3 stated that, he had not heard of the Maria, Crystal clan since August.

By sheer coincidence Marty called from Kentucky to up-date this investigator on the going’s on back home.

Anyway, here we go, now you may want to savor these words as the story is very funny, or not so it you are Ruby. As you know by now, the Sheffield’s men folk side, moved to Kentucky and life was quiet for a bit. Then the kin folk to Ruby picked a verbal fight.

Now, get this picture, Ruby is all of 4′ 11″ and her opponent is every bit of 6′ 3″. He gets to cussing Ruby over some meaningless idea and she goes to get a warrant from the justice of the peace. After listing to the complaint, the justice of the peace recognized that it was simply a hillbilly argument and no further action was needed.

Not very happy with the decision of the justice, these two got into it again, more verbal distention. Only this time, in fear of his life, (I mean why else would he do this) ole 6′ 3″ went to the justice of the peace himself and I reckon told a better tale.

It ended with RUBY being ARRESTED and charged with TERRORISTIC THREATS. There were no mention of explosives, nor was there any evidence that she intended to develop WMD (weapons of mass destruction). In any event she will stand before a Judge today at her first arraignment to face the charge of TERRORISTIC THREATS. In fairness and in understanding that this reporter was not there at the occurrence, but in studies conducted by others, I’ll bet she simply gave him and old fashioned cussing and said she would kick his ass, believing she might just do that, he in fear of his life, filed the charge. 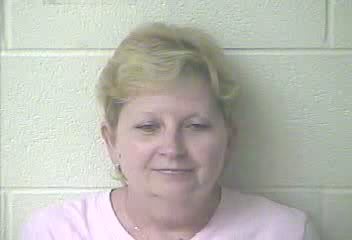