What's on my mind today? Justice has been served in my town. Matt Baker a narcissistic sociopath has been convicted and sentenced for the murder of his wife Kari Baker. He reminds me of Casey, his wife wasn't dead a month (he said of suicide) and he was out shopping for an engagement ring with his new flame. Check it out and celebrate with me. Woohoo!!! dancing


[You must be registered and logged in to see this link.]

----to the law enforcers in your town!!!!! I needn't look at the link to celebrate with you. I rejoice when murderers are caught and punished. I hope he gets the DP.

I read it. It is nice when justice is served. Why is it they always have a girlfriend on the side when they kill their wife's. He was duped the 'murdering minister". I will celebrate this with you. Thanks for sharing it.

I think that should go into our convicted section, Nikkin. What do you think?
_________________
Prayers for our little HaLeigh Cummings, wherever she may be!!

That sounds great Wrap. Convicted has such a nice ring to it :) TerryRose, he received 65 years and the options the jury received was anywhere from five years to life. The really sad part about this story is that there are two daughters (now 13 and 9) who are the ultimate losers in this case. I can't help but wonder about them and pray for them. They have lost their mother at the hands of their father and have been lied to about it since it happened. They were told that it was suicide. I just hope that there's a lot of love and maybe some counseling in their future to help heal the wounds. As much as I'm celebrating his conviction now, I'm so terribly sad for those girls.

Okay I will add him to the convicted ASAP. My pleasure. Those poor girls. To be told their Mom committed suicide and then to find out their Dad did it.

It truly is despicable and we are happy to add this convict to the "Accused". Those poor little girls.

Wow, the guy I told yall about earlier made the msnbc.com front page 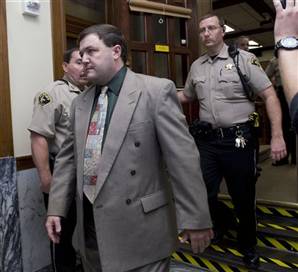 WACO, Texas - Jurors on Thursday sentenced a former Texas minister to 65 years in prison for murdering his wife and trying to cover it up as a suicide.

Jurors deliberated for about two hours before agreeing on the sentence for 38-year-old Matt Baker. He had faced from probation to life in prison for slipping his wife sleeping pills and suffocating her in 2006.

The case almost never went to trial. Her death was deemed a suicide after a note and sleeping pills were found by the bed, and Baker said she was depressed over their 16-month-old daughter's cancer death in 1999. But authorities reopened the case several months later after her parents shared evidence obtained for their wrongful death lawsuit against Baker.
When the judge asked if there was any legal reason why he should not be sentenced, Baker said: "I truly believe in my innocence. I believe the jury made a mistake in this."

During closing arguments, prosecutor Crawford Long — who previously called Baker a "murdering minister" — said he killed his wife in "cold-blooded cruelty" and seemed to take pleasure in getting away with it.

'Things he's not proud of'
Defense attorney Harold Danford said Baker "did some things he's not proud of" but reminded jurors that Baker was eligible for probation because he had not previously been convicted of a felony. He urged jurors to consider Baker's entire life and activities such as youth mission trips and his work as a Baptist pastor.

Prosecutor Susan Shafer said Baker was dangerous because he still could fool people into believing he was a good person. She said the "best of Matt" was his two daughters, who were asleep in the house when he killed his wife.

"He thought no more of them than to murder their mother and then erase her legacy with them by convincing them that she didn't love them enough to stay and raise them, that she committed suicide," Shafer told jurors.

I will be adding this story as a category tonight. For now I at least got the thread started. Feel free to blog here on this thread.

Thanks LM for making this a thread for me. I love you guys!

This is the case involving Southern Baptist pastor Matt Baker who, despite multiple reports of sexual abuse and assault, was able to move with ease through churches, schools and organizations affiliated with the Baptist General Convention of Texas. For over 16 years, what Matt Baker learned in Baptistland was that a Baptist pastor could get away with almost anything and face no consequence. Ultimately, he even tried to get away with murder. And he nearly did.

At the start of the murder trial, prosecutors said that they had evidence of at least 13 young women, including four minors, against whom Baptist pastor Matt Baker had made inappropriate “advances” and assaults.

From Texas Monthly's prior report, we know that at least three of those sexual abuse and assault reports were made directly to Baptist officials, including two at a single church – the historic First Baptist Church of Waco, Texas. Yet no one stopped Matt Baker. No one removed him from ministry. No one held him accountable.

How could a man with so many abuse and assault allegations remain as a Baptist minister? This is a question that Baptist officials need to address.

But that doesn’t happen in Baptistland. Instead, Baptist officials simply hunker down, recite their blind-eyed mantra of “local church autonomy,” and pretend that it’s not their problem. It’s a very dangerous head-in-the-sand sort of approach.

Matthew Baker is a former preacher and father of three who was convicted of killing his wife so he could be with his mistress. The Baptist minister drugged and suffocated Kari Baker and attempted to make her death look like a suicide. The scheme almost worked.

Born in Kerrville, Texas, to a contractor and high school teacher, Matt Baker was, as the Waco Tribune Herald reports, "a small-town boy who grew up to be a preacher." When Baker was a 23-year-old Baylor University senior he met Kari Lynn Dulin, then 20, at a Baptist day camp in Waco, Texas, in 1994. By that time, Baker had already developed a proclivity for aggressive sexual behavior. Four women, including an assistant student athletic trainer at Baylor who accused him of sexual assault, would later testify that Baker made unwanted sexual advances toward them.

Kari, however, was moved by her future husband's dedication to his religion. "The thing she kept talking about was, 'Mom, this guy's a really good Christian,'" Kari's mother Linda Dulin later recounted to CBS News. The couple wed three months after their first meeting.


The Bakers — Matt, now a Baptist minister and Kari, an elementary school teacher — immediately began a family. Kari gave birth to daughters Kensi in 1995 and Kassidy just over a year later. But their domestic bliss turned sorrowful when, shortly after her first birthday, Kassidy was diagnosed with a brain tumor. She died four months later.

The loss of her daughter sent Kari reeling, Matt Baker later told CBS, and although she gave birth again the next year, she struggled with depression and sleeplessness. Matt Baker also claimed the depression ultimately led Kari to take her own life. On April 8, 2006, Baker says he returned home from renting movies to find his wife dead on their bedroom floor. Baker claimed to have found an empty sleeping pills bottle next to Kari's lifeless, naked body and a typed suicide note reading, "Matt, I am so sorry ... Please forgive me ... I want to give Kassidy a hug."

Tiny McLennan County didn't have its own medical examiner. Police described the scene over the phone to a justice of the peace who determined Kari had died from a sleeping pill overdose. Authorities didn't perform an autopsy, ruling the death a suicide.


Kari's mother and three aunts didn't believe it was a suicide. The women began their own investigation with Matt Baker as the primary suspect. They discovered someone had started using Kari's cell phone 10 days after her death. That person was Vanessa Bulls, the daughter of a music director at the church where Baker preached. Bulls would later testify she and Baker had begun an affair about two months before Kari died.

Authorities ordered Kari Baker's body exhumed in the summer of 2006, but they were unable to determine a cause of death. Even so, pieces of the puzzle began to fall into place. An affidavit issued for Baker's arrest in September 2007 showed Kari had recently told a counselor that she believed Matt was trying to kill her; she had found crushed pills in his briefcase. Searches of Baker's home and work computers revealed the preacher had spent much time researching sleeping pill overdoses online. In addition, court records indicate Matt Baker was seen with Bulls in a Waco jewelry store shopping for engagement rings within days of his wife's death.

The Preacher Goes to Court

Baker, who by then had moved back to Kerrville, where he and his daughters lived with his mother, went on trial for his wife's murder in January 2010. No longer dating the clergyman, Bulls became the star witness in the case against him. She testified that Matt Baker told her the details of Kari's death. According to Bulls, Baker told his wife he wanted to spice up their sex life. Kari took what she thought was a sex enhancement pill, but was actually a sleeping drug. As she drifted to sleep, Baker handcuffed Kari to the bed and proceeded to smother her with a pillow. Before calling police, Baker typed the suicide note and rubbed Kari's fingerprints over it.

Jurors were convinced by Bull's damning testimony. On Jan. 20, 2010, 38-year-old Matthew Baker was convicted of murdering Kari Lynn Baker. He was subsequently sentenced to 65 years in prison. From behind bars, he continues to maintain his innocence.

I am so glad to hear that little weasel got 65 years! I saw the story on I.D. twice and couldn't stand to look at him nor listen to him. I'm thankful that the ex gf testified against him and that Kari's family turned detective otherwise that weasel would have gotten away with murder.

This story reminds me of Rev. William Guthrie. He was a preacher at a church in the small nebraska town I grew up in. He had an affair with a paritioner and when it was found out he was transfered to South Dakota. He made many trips back to Nebr. He ended up killing his wife, not sure I remember exactly how just that she drowned in the bathtub and had alot of some drug in her system. A sleeping pill I believe. Also seems like I heard he died in Prison earlier this year.